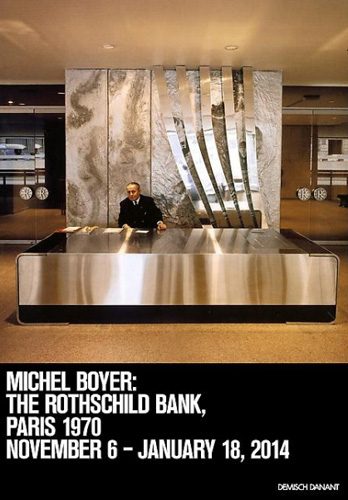 New York, NY…Demisch Danant is pleased to announce the exhibition Michel Boyer: The Rothschild Bank, Paris 1970, dedicated to the celebrated decorator’s designs for the Rothschild Bank on rue Lafitte in Paris. On view from November 6, 2013, through January 18th, 2014 at the gallery’s New York City space, the exhibition will present rare and important works designed for this landmark commission, as well as works by artists with whom Boyer collaborated. The Rothschild Bank is widely regarded as leading exemplar of French style of the 1970s. For the project Boyer designed furniture and interiors in his signature contemporary style — works that art coveted today.

The exhibition at Demisch Danant comprises several major pieces designed for specific areas of the Rothschild Bank. On view will be a unique desk in stainless steel and walnut, designed by Boyer for Elie de Rothschild’s private office. Sleek curved steel and the designer’s deft interplay of solids and voids make this desk an iconic example of the aesthetic that established Boyer as an influential figure in postwar European design. Boyer’s molded fiberglass chairs, conceived for the bank’s cafeteria, will be presented in an environment that evokes the original room and includes a re-creation of the original mural that artist Guy de Rougemont painted for the space.

In addition to these works, Michel Boyer will present Prayer Rug by Sheila Hicks, a now-celebrated American artist who has lived in Paris since 1964. Commissioned by Boyer for Elie de Rothschild’s private collection, this highly textural work – the only one of Hicks’ celebrated prayer rugs to include mohair – employs recognizable forms and techniques that characterize the seminal early years of her career.

Michel Boyer began his practice as a decorator and designer by specializing in office furniture, corporate offices, and banks, while employed by the architect Pierre Dufau. He designed contemporary furniture channeling the progress-loving postwar spirit and utilizing the materials of his era: stainless steel, laminate, fiberglass and lacquer. In 1965, Dufau entrusted Boyer to design the interiors for a building meant to temporarily house the Rothschild Bank. After revealing innovative designs for the temporary building, Boyer was commissioned to develop contemporary interiors for the final structure, which was designed by American architect Max Abramovitz, designer of Lincoln Center’s Avery Fisher Hall in New York City. The Rothschild Bank building was completed in 1970, setting a new standard for refined, contemporary French style.