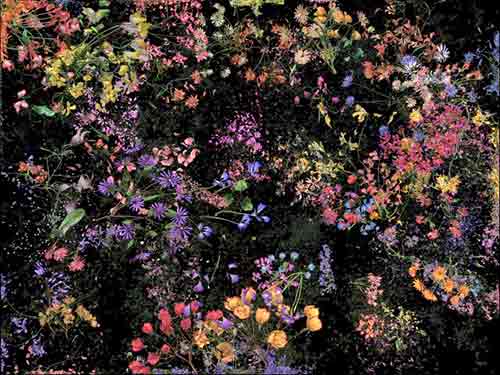 Botanic is an animation consisting of flowering condolence plants floating inside a cubic framework. The flowers are blown by an unseen force, causing the plants to collide with each other and the edges of the frame. With each collision, they break apart into a collection of seeds, twigs, leaves and petals. The animations loop forward and back, transitioning between breaking apart and coming back together. By placing the animations on multiple screens in Times Square, the container of the video expands to the space of the city, where the imagery of nature contrasts against the man-made architecture.

Jennifer Steinkamp said, “The opportunity to create artwork on such a grand scale within extreme iconic architecture is amazing for me. I am excited about my work being presented in this context, and the meaning that the artwork can lend to the context and vice versa.”

Tim Tompkins, President of the Times Square Alliance, said, “Times Square often reflects the transitioning moods and thoughts of our culture – and as we leap into spring, Steinkamp reminds us of the transience of nature in our less than natural environment here.”

Sherry Dobbin, Times Square Arts Director, said, “We have been fascinated with Steinkamp’s ability to trick us into perceiving a natural environment with the most artificial of technologies.”

Fred Rosenberg, President of the Times Square Advertising Coalition, said: “As we begin our fifth year of the Midnight Moment program, it seems appropriate to celebrate with a vibrant bouquet of flowers that reflects the colorful atmosphere of Times Square.”

Harry Coghlan, Chairman of the Times Square Advertising Coalition, said: “The TSAC organization was captivated with the movement and vitality that carpets every inch of the enormous screens. It’s perfect timing for a piece that showcases the beauty of springtime as we approach Mother’s Day and Memorial Day.”

The following digital screens are participating in the May Midnight Moment:

Times Square Arts, the public art program of the Times Square Alliance, collaborates with contemporary artists and cultural institutions to experiment and engage with one of the world’s most iconic urban places. Through the Square’s electronic billboards, public plazas, vacant areas and popular venues, and the Alliance’s own online landscape, Times Square Arts invites leading contemporary creators to help the public see Times Square in new ways.  Times Square has always been a place of risk, innovation and creativity, and the Arts Program ensures these qualities remain central to the district’s unique identity. Generous support of Times Square Arts is provided by the. New York State Council on the Arts, the New York City Department of Cultural Affairs, and the National Endowment for the Arts. Visit http://www.timessquarenyc.org/times-square-arts/index.aspx for more information. Follow us on Twitter and Instagram at @TSqArts.