Thanks to the Lebowitz Family

Scheduled Cut Down on November 10

Arrival at Rockefeller on November 12

Rockefeller Center today announced details regarding this year’s Christmas Tree. The Lebowitz family of Glens Falls, New York donated the 14 ton (appox.) tree that’s 82 feet in height and 50 feet in diameter. It’s to be cut down on Thursday, November 10 and is scheduled to arrive at Rockefeller Center two days later on Saturday, November 12. Thereafter the Norway Spruce will go through a weeks long period of preparation and decoration will take place culminating in the grand tree lighting on Wednesday, November 30, 2022.

The lighting ceremony itself will involve numerous televised performances (many of which are pre-taped) with appearances and live performances by some well known celebrities. It will take place from 7:00 pm to 10:00 pm at the Rink/Plaza behind 30 Rockefeller.

It’s on that day that the tree the countdown to the tree’s lighting will take place. We’ll all then witness the most highly anticipated event of the season. That is, this year’s Christmas Tree donned with five miles worth of stringed LED lights numbering past 50,000. On top will sit the 9.4 feet high Swarovski star weighing 900 pounds and covered in 3 million crystals.

Through the rest of this page you’ll find postings from Christmases past. 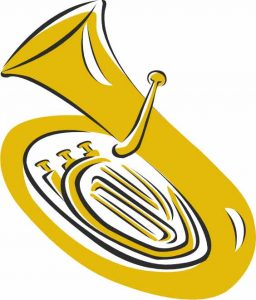 “Carols Under the Tree” will be taking place on the 50th Street side of Rockefeller Plaza outside of 30 Rock.

Gather round as many tuba playing performers belt out one holiday song after another.

They’re set to play Christmas carols and other crowd favorites. The tubists of all ages will line up under the great Christmas tree and fill the area with the organ-line sound of low brass.  Spectators will be encouraged to become an important part of the concert by singing along with the Christmas carols and famous songs.

“”Recruited from throughout the greater New York City area, the musicians will be conducted by Chris Wilhjelm, conductor of the famous Goldman band. Conceived by tuba virtuoso Harvey Phillips to honor his teacher, the late William J. Bell (Born Christmas Day, 1902), the first Tuba Christmas was presented at Rockefeller Center in 1974, conducted by Paul LaValle, of Band of America fame.  This unusual Christmas tradition is firmly established in over 200 cities around the world.””

Mind you the Tuba performances at Rockefeller won’t be the only one around. Here below is a quick list of those taking place at other locations beyond our New York City borders:

Near fountain on Front Street in Port Jervis, NY
Sunday, November 27 at 12:00 Noon 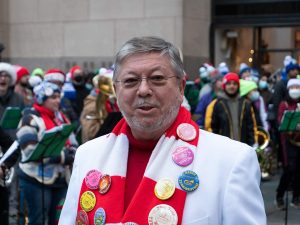 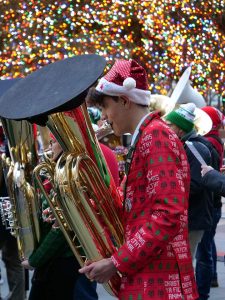 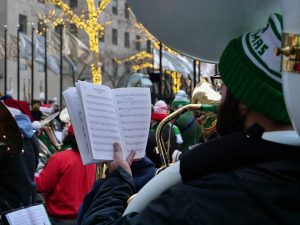 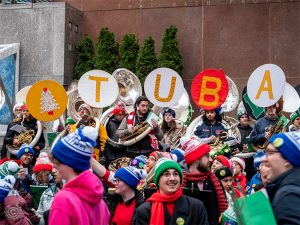 2021 Press Release (albeit late) from Tishman Speyer regarding this year’s tree:

Tree from Elkton, Maryland Features a Swarovski Star and More Than

This year’s tree comes from the home of Julie and Devon Price in Elkton, Maryland. The tree was cut down on November 11th and arrived in New York City on November 13th, where it was raised into place in front of a crowd of spectators. Devon and Julie, joined by the rest of their family, attended the tree lighting ceremony today.

This year marks the 18th year a Swarovski Star tops the Rockefeller Center Christmas Tree. The star, which debuted in 2018, is made up of 70 spikes covered in 3 million crystals, is nearly 9 ½ feet in diameter, and weighs 900 pounds.

Rockefeller Center began its iconic Christmas Tree Lighting Ceremony in 1933, when a Christmas tree was placed in front of the then-RCA Building and decorated with 700 lights. Now a quintessential New York tradition, the Christmas trees in Rockefeller Center have ranged from 50-foot Pines to 100-foot Norway Spruces and are enjoyed by millions of New Yorkers and visitors from near and far throughout the holiday season.

The following is from the past

2021 Rockefeller Center® Christmas Tree will be coming from Elkton Maryland

The tree was cut on Thursday, November 11 and made its way to Rockefeller Center where it was erected on Saturday, November 13, 2021.

For the first time ever the tree will be coming from the state of Maryland. In past years the location has usually been from within New York State.

Additional details about the Norway Spruce from Elkton, Maryland:

The 79-foot tall, 46-foot in diameter, 12-ton Rockefeller Center Christmas Tree from Elkton, MD, will be driven onto Rockefeller Plaza, raised off of its 115-foot-long trailer and erected by the Skating rink.

This year’s Christmas in Rockefeller Center Lighting Celebration will take place, as usual, on the first Wednesday following Thanksgiving which this year lands on December 1.

The tree will remain on display until Sunday, January 16, 2022

We’d like to mention something which we’ve taken to pointing out in recent years.

Prior to COVID, folks would turn up in the hundreds if not thousands for this event. Why? We’ve no clue except perhaps for the sheer excitement of being there en masse for the countdown to the tree’s lighting.

If you do show up this year, remember. Most performances scheduled for that evening’s TV airing had likely already been pre-taped and shot elsewhere. Anything that does take place is likely happening down below within the ice skating rink which only a very select small number of people have access to. You’ll likely NOT have direct line of sight to the tree due to the other crowds present and areas being cordoned off for security reasons. Thus, it’d behoove you, especially in light of our current health crisis (which is still going on), to either view the event from the best seat in the house (your home) OR through your smartphone. The latter being not so shabby an idea should you wish to catch sight of the tree that very same evening following the culmination of the big event.

at the Rockefeller Plaza Rink
between West 48th and 51st Streets
and betw. 5th and 6th Avenues

The prior year’s (2017) tree, a Norway Spruce came to us from State College, Pennsylvania.

The more than 50,000 multi-colored, energy efficient LED lights on the 72-foot-tall Rockefeller Center Christmas Tree will be lit on Wednesday, November 28th.

2016’s Christmas Tree came from Oneonta, New York. It was cut down on November 10 and arrived in midtown Manhattan on November 12. According to the Daily Star News which hails from the local area the giant Spruce came to us from Angie and Graig Eichler’s backyard along Country Club Road.

It’ll be an 80 ft Norway Spruce and will be coming from Joseph Balku’s home in Morris County, New Jersey. The 10 ton and 50 foot in diameter tree will be hoisted by crane onto a trailer which will transport it to Manhattan.
November 14 Update:
The Tree had arrived at Rockefeller already.

A 75 Foot Tall Spruce from Mifflinville, Pennsylvania is this year’s chosen tree.
It’ll be the first time that a tree had been selected from that state to become the Rockefeller Center Christmas Tree.
The 46 foot wide tree had been cut on Wednesday, November 9 and was hoisted by crane onto a 115 foot trailer on which it was driven to NYC for a Friday, November 11 morning arrival.

Being a military wife, Nancy Keller has lived all over the United States – from Alabama to Alaska – but Mifflinville, Pennsylvania has always been home.  It is here, where she grew up, went to high school and met her late husband, Doyle Keller, that she and three more generations of her family have made a home.

Doyle served stateside in the United States Air Force for 20 years.  His years in the military brought a number of moves for him, Nancy and their daughter, Debra Keller.  In 1969, right before Debra started her junior year of high school, Nancy and Debra returned to Mifflinville and were soon followed by Doyle when he retired in 1970.

When Nancy and Doyle moved onto the property where the tree resides in 1985, Doyle wanted nothing to do with the massive tree situated next to the house and even suggested cutting it down.  It took some convincing by the family, but with the help of some trimming, a little love and some very tall ladders Doyle was won over and the tree became a part of the landscape that everyone enjoyed.

“I had poked around the website to see how to nominate our tree but never filled out the application,” said Debra who now lives in the house next door to her mom in Mifflinville.  “You can imagine our surprise when we got a knock on the door from Rockefeller Center’s head gardener.”

This year’s Rockefeller Center Christmas Tree arrived at Rockefeller Plaza on November 11, Veteran’s Day, which seems just right to Nancy.  “Doyle’s time in the Air Force and his being a veteran was a big part of who he was – who our family is.  I know he would have enjoyed all of the enthusiasm around our tree being chosen and would have really enjoyed seeing his grandchildren and great-grandchildren so excited.”

The tree was first spotted by the Rockefeller Center team during a routine drive down I-80.  Rockefeller Center’s head gardener saw the tree out of the corner of his eye from the driver’s seat.  Even from hundreds of yards away the 74- foot tall Norway Spruce made quite an impression.
As a Christmas present every year Debra takes her granddaughters to New York City.  The trip is full of holiday traditions – they go to a show, have lunch at the girls’ favorite restaurants, and shop at their favorite stores.  The highlight of the annual vacation is always the visit to the Rockefeller Center Christmas Tree, which this year will be their own.

“To be honest it won’t be sad to see the tree go,” Debra said.  “We just feel honored that the tree was chosen and will be enjoyed by so many people when it’s sitting in the middle of Rockefeller Center.”

As with all other public events in NYC, the crowd forms awfully early, so if you plan to be there then you know what to do since the crowd will of course be huge. The tree will remain lit until early January 8, 2007. Enjoy!

Where else on earth will thousands and thousands gather for the lighting a single tree? NYC’s Rockefeller Center, that’s where! Join in this fantastic event which is televised nationwide and perhaps even across the seas. Entertainment, Singing, and yes, our Mayor too! The tallest tree so far was the 100-foot Norway Spruce from Killingworth, Conn. in 1948. Maybe this year’s will be taller? Over 25,000 lightbulbs are used to light the tree. Amazing huh? They span a distance of over 5 miles.

The event which is televised nationwide and has local Television Stars amongst others. The Mayor himself would often take part in this yearly tradition.