The Museum Of The City Of New York

Muslim In New York: Highlights From The Photography Collection 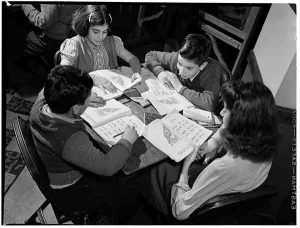 New York, NY (February 10, 2017):  On Saturday, February 18, 2017, the Museum of the City of New York will open a special installation, Muslim in New York: Highlights from the Photography Collection, featuring 34 historic images of Muslim New Yorkers in the 20th and 21st centuries by photographers Alexander Alland, Ed Grazda, Mel Rosenthal, and Robert Gerhardt.
“This special installation comes at a time when the place of immigrants from Muslim-majority countries is being scrutinized, and even challenged, on a national level,” said Whitney Donhauser, the Museum’s Ronay Menschel Director.  “The Museum’s rich photography collection, begun in the 1930s and growing each year, speaks eloquently to the enormous diversity of our city and the many ways in which immigration and religious diversity has enriched and benefited New York, the quintessential city of immigrants. We are proud to display these beautiful images of Muslims in New York as part of that story.” 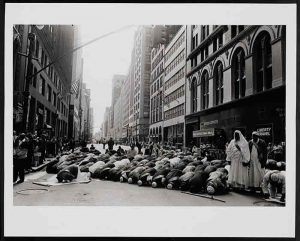 Muslims have been woven into the fabric of New York since the city’s origins as New Amsterdam. Antony Jansen van Salee, a Muslim of North African and Dutch descent, lived and owned property in the town in the mid-17th century, and the slave trade brought additional Muslims to New York to perform forced labor in the 17th and 18th centuries. In the late 19th century, immigration from the Middle East created an Arabic-speaking community centered in Lower Manhattan. Although most of the residents of “Little Syria” were Christian, Muslims became a significant presence within the community, and Turkish, Russian, Albanian, Bengali, and other Muslims added to the cultural and religious landscape. By the 1910s, the diverse Muslim community could attend prayers in a “Turkish chapel” that served as a mosque in Lower Manhattan.
In the years between World Wars I and II, the size and diversity of New York’s Muslim community continued to grow, with Muslims living and worshipping in Harlem and Brooklyn as well as Lower Manhattan. Beginning in the 1930s, New York City also became a base for the growing Nation of Islam, with Malcolm X ultimately becoming the city’s most famous and influential Black Muslim leader before his death in 1965. The change in U. S. immigration laws in 1965 ushered in a period of massive expansion and further diversity, as new arrivals from the Middle East, Africa, South Asia, and elsewhere made the city their home. By 2015, an estimated 3% of the population of New York City–some 270,000 people–identified as Muslim.
The photographs on view in the exhibition span from the mid-20th century to the early 21st century.  Four photographs by Alexander Alland date to ca. 1940, a time when New York’s diverse Muslim community included Turks, Afghans, East Indians, Albanians, Malayans, African Americans, and others. Photographs by Ed Grazda come from his project, “New York Masjid: The Mosques of New York City,” which he undertook in response to the Islamophobia after the 1993 World Trade Center bombing; these images cover both immigrant populations and the native New Yorkers of the 1990s, including converts, the long-standing African-American community, and a growing Latino Muslim community. Mel Rosenthal’s photographs of Arab New York Muslims from the early 2000s were commissioned for the Museum of the City of New York’s exhibition A Community of Many Worlds: Arab Americans in New York (2002). Finally, Robert Gerhardt’s images, a promised gift to the Museum’s collections, document Muslim New Yorkers in the early 2010s. Together these photographs paint a group portrait of New Yorkers who have greatly enriched the life of the city. 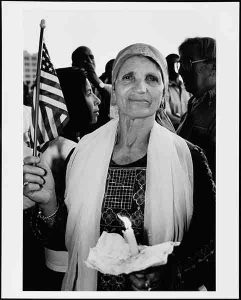 Muslim in New York delves into several themes from the Museum’s newly launched signature, permanent exhibition, New York at Its Core, which is structured around four themes – money, density, diversity, andcreativity – and argues that a distinctive blend of these key characteristics has produced a powerfully creative environment that has made New York a center of innovation in the arts, business, science, politics, and urban development for over four centuries. The photos in Muslim in New York again present ideas embodied in New York at Its Core: that immigration and diversity have been and remain central to the evolution and resurgence of our city.

The Museum of the City of New York collects images of our city’s diverse population as part of its mission to document, preserve, and interpret the history of New York’s five boroughs and its heritage of diversity, opportunity, and perpetual transformation.
The Photography Collection at the Museum consists of more than 400,000 prints and negatives that document New York City and its inhabitants from the mid-19th century to the present. Some of New York’s earliest photographic views are represented in the waxed-paper negatives of Victor Prevost, and the proliferation of the medium is exemplified by the Byron Collection of more than 22,000 images chronicling New York life from 1892 through 1942.
The collection is a major repository of several noted photographers, including Jacob Riis, whose photographs reveal the Lower East Side’s poverty and squalor in the late 19th century; Jessie Tarbox Beals’ depictions of turn-of-the century bohemian life in Greenwich Village; and Berenice Abbott’s stunningChanging New York, a Works Progress Administration (WPA) photographic project that documents New York City in the 1930s. Additionally, the Museum’s voluminous holdings incorporates the LOOK Magazine photographic archives which features photographers, such as Stanley Kubrick, John Vachon, and Arthur Rothstein; includes the work of commercial photographic firms such as Irving Underhill, the Wurts Brothers, Gottscho-Schleisner; and photographs commissioned by the architectural firm, McKim, Mead and White.  More contemporary holdings include work that examines the city’s built environment since the 1950s, including more than 60 photographs from Danny Lyon’s Destruction of Lower Manhattan series from the late 1960s, a collection of city views by Camilo Jose Vergara, and more 1,000 architectural views of New York by Edmund Gillon during the 1970s and 80s. Also, the lives of New Yorkers on city streets are documented in the Collection through the eyes of photographers such as Harry Callahan, Martha Cooper, Leonard Freed, Ed Grazda, and Jeff Mermelstein.

About the Museum of the City of New York

Founded in 1923 as a private, nonprofit corporation, the Museum of the City of New York (MCNY) celebrates and interprets the city, educating the public about its distinctive character, especially its heritage of diversity, opportunity, and perpetual transformation. The Museum connects the past, present, and future of New York City, and serves the people of the city as well as visitors from around the world through exhibitions, school and public programs, publications, and collections.
Capping a 10-year, $100 million renovation, in November 2016, the Museum opened New York at Its Core, a landmark permanent exhibition five years in the making and occupying all three first-floor galleries. Attracting record attendance on site and online, New York at Its Core, which covers the city’s past, present, and future through state-of-the-art interactive technology, is the only museum exhibition that conveys the complete, dramatic sweep of New York City’s 400-year history.