NY Governor Andrew Cuomo reported this week that Coronavirus related hospitalizations as well as the seven-day average of positivity rates have continued and are expected to continue their decline.

Over the past weeks the Governor has continually spoken of the COVID rates post holiday season. Just as he predicted in the weeks leading to the height of the Christmas season New York experienced an overall rise in virus-related statistics.

“On controlling the COVID Spread, the good news is the number is down – and it has been continuing to decline,” said the Governor. “You look at our high point where we were at 7.9%. That’s in the beginning of January. We’re now down to about 5.85%. That then tracks to the hospitalization rate. These are all connected.”

The following chart illustrates the rise from the days before Christmas to the most recent date of January 25. You can see the 7 day average for the state’s positivity rate reach a high of 7.4% on January 4.

“Infection Rate. A few days later the person goes into the hospital. So they call that the hospitalization lagging indicator – but the number of people being hospitalized has gone down. You see this is true all across the state.”

The Governor said that overall, every region in the state is on the decline. Some regions faster than others.

“One of the most important numbers – we don’t talk about it every day is the rate of transmission. What they call the Rt rate. This is, for every person who’s infected, how many people do they infect? You can see, at our high point, one person was infecting two and half other people. They say, anything over one the virus is out of control. When one person is infecting more than one other person, and ideally, you want to be under one. That’s where we are right now. But it’s been a bumpy ride to get here.”

“The projection models done by the “experts”, in the field, show New York’s positivity rate continuing to decline. So not only are we on the way down but the experts tell us that they believe that’s going to continue.”

The following charts continue that which we’ve been doing off and on for months – an illustration of our progress in hospitalizations and deaths. Through these, we hope to demonstrate different ways of viewing the data that’s available. 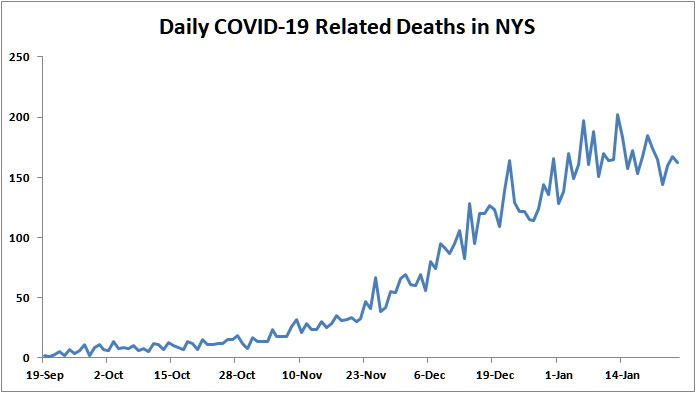 As stated in previous related postings, these charts begin at the time when the rise in cases and their effects were on the rise (around the third week of September 2020) 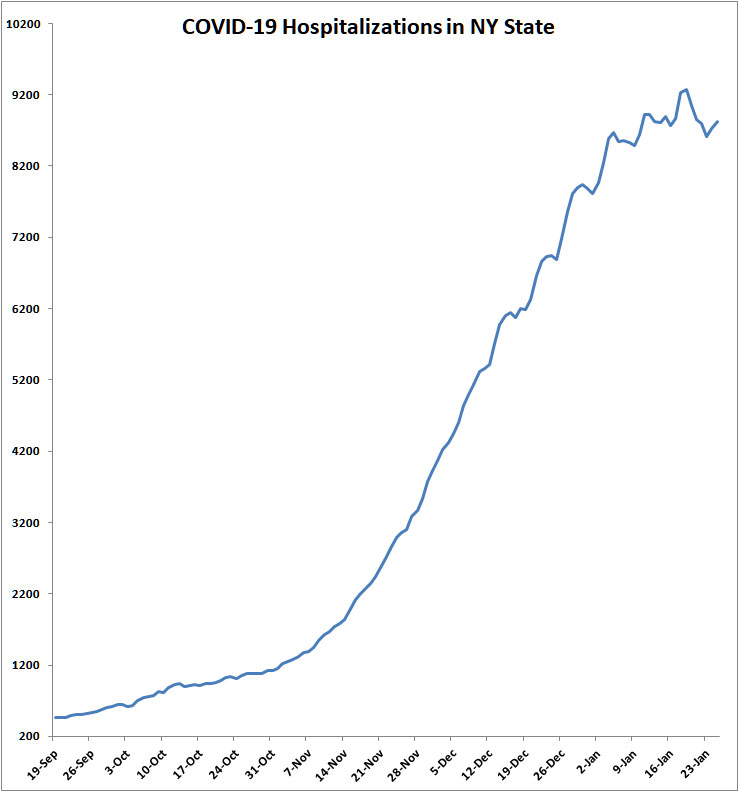 Having the chart for hospitalizations begin at December 1 may do a better job of demonstrating the statistic’s most recent trajectory. 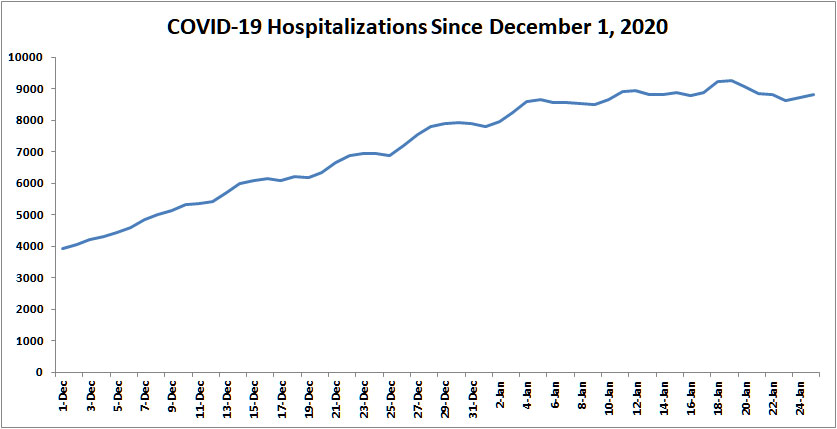 Here we’ve set the starting date at the very beginning of the month.