Releases Video Footage as Part of Investigations into the Deaths of Daniel Prude
and Troy Hodge, Outlines Policy for Release of Future Video Evidence 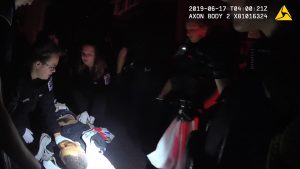 NEW YORK – Attorney General Letitia James today released police body-worn camera and dashboard camera footage that the office obtained as part of its ongoing investigations into the deaths of Daniel Prude and Troy Hodge. The Special Investigations and Prosecutions Unit (SIPU) of the Attorney General’s Office released 11 separate videos as part of its ongoing investigations into these deaths, which occurred following encounters with members of law enforcement.

The release of these videos follows Attorney General James’ directive that police body-worn and dashboard camera footage obtained by her office in the course of a SIPU investigation be released to the public in order to increase transparency and strengthen public trust in these matters. SIPU also outlined its policy for releasing such video evidence in the future.

“Our criminal justice system is in need of significant reform to rebuild the trust between police and the communities they serve,” said Attorney General James. “Key to that reform is increased transparency, which is why I am proactively releasing video footage from our active investigations into police-involved killings. All of our communities deserve transparency, accountability, and justice, and I believe this is a critical step in moving us forward.”

SIPU is currently conducting an investigation into the death of Daniel Prude, who died after an encounter with members of the Rochester Police Department in March 2020. SIPU released six videos with redactions of the police encounter with Mr. Prude.

SIPU is currently conducting an investigation into the death of Troy Hodge, who died after an encounter with members of the Lockport Police Department and the Niagara County Sheriff’s Office in June 2019. SIPU released five videos with redactions of the police encounter with Mr. Hodge.

SIPU is currently conducting an investigation into the death of Susan Harrington, who died as a result of a vehicular collision involving a member of the Washington County Sheriff’s Office in August 2019. There is no body-worn camera or dashboard camera footage of the collision.

Pursuant to Executive Order No. 147, the New York State Attorney General serves as special prosecutor in incidents where a law enforcement officer causes the death of an unarmed civilian, or where there is a significant question as to whether the civilian was armed and dangerous. These cases are handled by the Attorney General’s Special Investigations and Prosecutions Unit (SIPU). SIPU investigates and, if warranted, prosecutes these cases. In cases where there is no indictment or SIPU does not present the case to a grand jury, SIPU issues a comprehensive, detailed report about the incident and the investigation, and makes substantive policy recommendations.

While SIPU’s primary objective is to fairly and thoroughly investigate these incidents, it also seeks to provide transparency to the public and to strengthen the public’s trust in these matters.  As detailed below, to further increase transparency, Attorney General James issued a directive that body-worn camera and dashboard camera footage obtained in the course of a SIPU investigation into a matter over which SIPU has jurisdiction will be released to the public.