During his press conference today, NY Governor Andrew Cuomo expressed his concerns over rising COVID-19 related hospitalizations which are expected to worsen through the upcoming holiday season.

The Governor presented a strategy tailored towards containing the spread of Coronavirus and avoiding the overwhelming of the state’s hospital system.

“We are now worried about overwhelming the hospital system,” said the Governor. “And if those numbers continue to increase, which we expect they will, you will see serious stress on the hospital system. So, we’re adding those factors into the equation.”

Past summaries for the rate of COVID-related hospitalizations show that they’ve been increasing since September with a steeper climb in the month of November. More recent charts can be found below.

A week ago, the Governor predicted that hospitalizations would increase to beyond 6,000 within a few weeks. Yesterday, seven days since then, that number has risen by 77% from 2,724 on November 22 to 3,532 on November 29.

The following numbers represent a 233% rise from one month to the next. 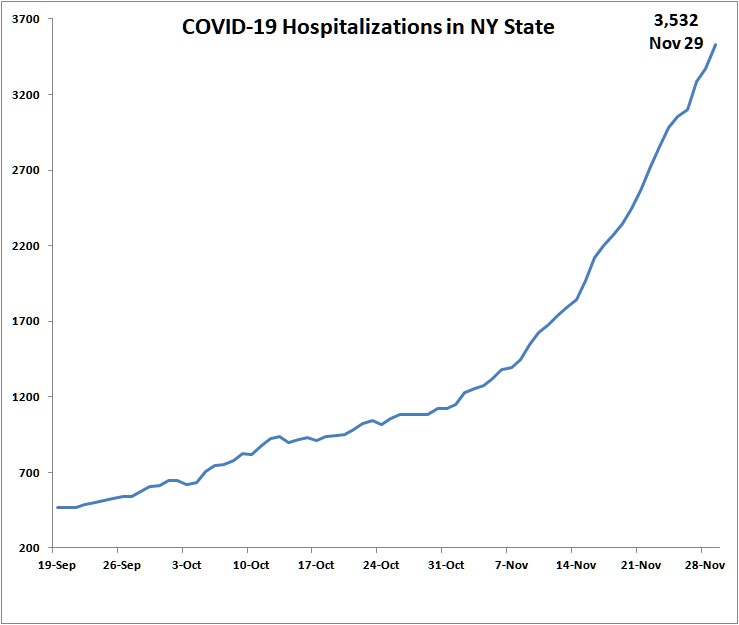 49.2 has been the average daily number deaths for the past seven days. It’s been 41.3 for the past 14 days. For the entire month thus far the average has been 31. By comparison, for the last week of October that number was at 14.

The highest number of deaths in a day has been 67 on November 25.

Following chart illustrates the daily number of deaths in New York State from September 19 to November 29: 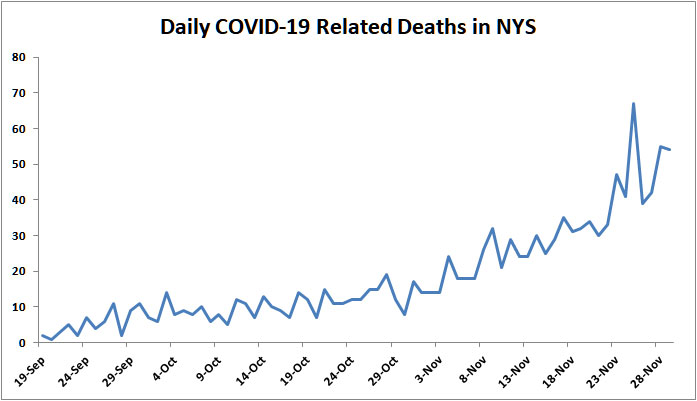 “COVID rates go up, as COVID rates go up, what happens? The hospitalization rate goes up. And the hospitalization rate is increasing dramatically. End of June, we’re about 900 – we’re now at 3,500 since the end of June, and that is before feeling the effect of the holiday season. So, this, my friends, is the problem. And we are seeing the rise in hospitalizations all across the state. And it’s not a situation where it’s only happening in one part of the state and we can then shift resources from one part of the state to the other. Remember, the first go-around, it was primarily New York City, downstate, we had upstate resources we could share with downstate. That is not the case this time. It is statewide.”