During his press briefing today, NY Governor Andrew Cuomo stated that indoor dining in NYC could come to a halt in one week if the rate of hospitalizations did not stabilize.

Governor Cuomo said that if the hospitalization rate doesn’t stabilize over the next five days then the allowed indoor dining capacity of 25% could go to Zero within New York City and from 50% to 25% for those areas beyond. He added that this could take place by Monday, December 14.

He didn’t exactly say non-essential businesses but, contextually speaking, one could easily presume that’s exactly what he meant to say. Also, the Governor did not specifically address when exactly an actual full shutdown might take place.

It was just 2 ½ weeks ago that both the Governor and NYC Mayor Bill de Blasio spoke of the likelihood of the city entering Orange Zone status due to COVID-19 positivity rates.

Once again, as in previous weeks, the Governor reiterated that which he’s mentioned. How the effect of the past holiday is still to be felt.

Governor: “In regard to the issue of the holiday spread and the peaks, they are going to be superimposed on each other. So, you would expect the full brunt of the travel and family setting gatherings with friends that you alluded to as a problem, you would expect the effect of the Thanksgiving surge in probably another week and a half from now. It’s usually two weeks from the time of the event. The problem is, that’s going to come right up to the beginning of the Christmas and Hanukkah potential surge. So, you have a surge upon a surge, and then before you can handle that, more people are going to travel over Christmas, they’re going to have more of those family and friend gatherings that you accurately said are an issue.”

New Yorkled has been following the rate of hospitalizations in New York for weeks now, as can be seen from our previous postings. It’s only in recent days that the Governor has stated that the state’s focus would center more upon that metric and not the positivity rate.

The latest numbers show that the rise in hospitalizations has continued on its climb with deaths having jumped over the 70s reaching a high of 80 for yesterday.

The following charts demonstrate such surges: 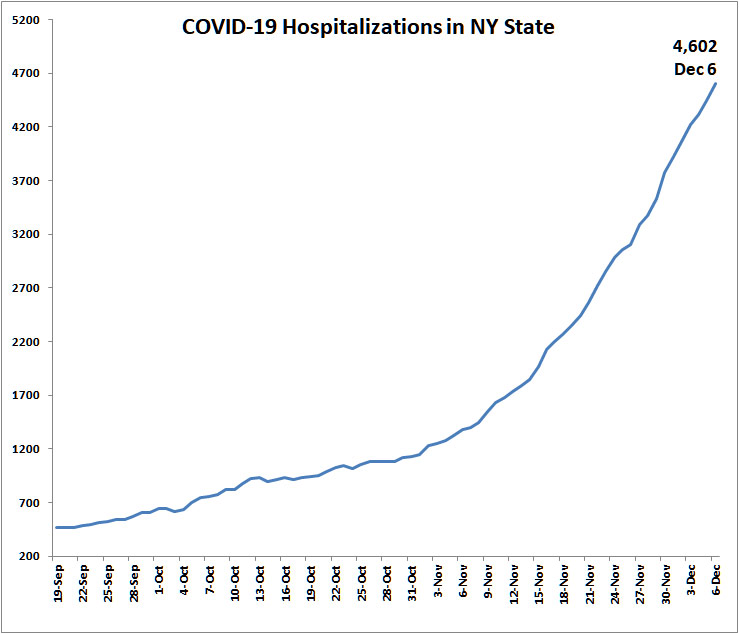 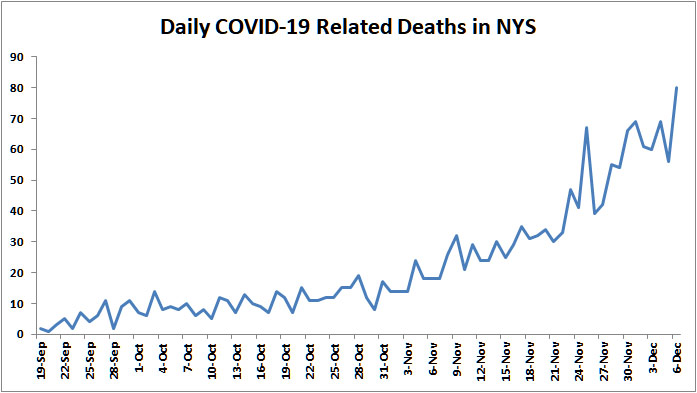