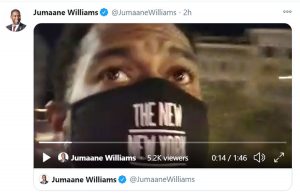 NY Public Advocate Jumaane Williams made an appearance at Manhattan protests today and was met with aggressive behavior from the NY Police Department.

Mr. Williams issued a statement earlier in the day in response to the force used by the NYPD in dealing with the prior night’s protests.

Tonight he retweeted a posting from Gothamist Reporter Christopher Robbins demonstrating the confrontation.

In the following tweet he states: “NYPD was trying to clear the street to make an arrest. Aggressively. Officers then appeared to begin setting up for mass arrests— we intervened to try and de-escalate and prevent that. Most importantly, there seems to be a lack of leadership when the City needs it the most.”

NYPD was trying to clear the street to make an arrest. Aggressively.

Officers then appeared to begin setting up for mass arrests— we intervened to try and de-escalate and prevent that.

Most importantly, there seems to be a lack of leadership when the City needs it the most. https://t.co/ij7xxwCwT5

“Last night, we saw videos of the NYPD appearing overly aggressive in the way it polices certain protests – particularly through kettling and dozens of arrests. These early enforcement actions seemed intended to suppress, rather than ensure that non-violent protest happens safely. The context of a contentious election and the disparate response to recent protests for other causes are reasons for even greater scrutiny and deeper concern. I was not present last night, but over the summer I personally witnessed extreme aggression by police that was excused and dismissed by the department and the Mayor.

“After a summer of sustained protest, the administration and NYPD could have honestly acknowledged their failures in policing protests, and acted in good faith to try to correct the disparate precedent set. Sadly, that did not occur, and the Mayor still refuses to admit to the reality of the aggression that the public has seen and experienced. What we’re witnessing now are the disturbing results of the administration’s opportunity missed, obligation ignored and inability to provide the leadership needed at this moment.”