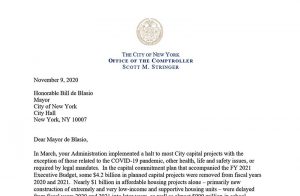 Text of the letter is available below.

In March, your Administration implemented a halt to most City capital projects with the exception of those related to the COVID-19 pandemic, other health, life and safety issues, or required by legal mandates. In the capital commitment plan that accompanied the FY 2021 Executive Budget, some $4.2 billion in planned capital projects were removed from fiscal years 2020 and 2021. Nearly $1 billion in affordable housing projects alone – primarily new construction of extremely and very low-income and supportive housing units – were delayed from fiscal years 2020 and 2021 into later years, as well as almost $900 million in school construction projects. Total final capital commitments for FY 2020 were $8.06 billion – just half the authorized total for the year, and 36 percent below FY 2019’s total of $12.6 billion.

As I noted when I wrote to you on this subject previously (see enclosure), stopping the capital program has consequences that outweigh any short-term savings that might be achieved. Continued capital investment is critical to maintaining our assets in a state of good repair and meeting the service needs of our City now and in the future, to promoting economic recovery, and to providing opportunities to build wealth for women and communities of color.

The Adopted Budget capital commitment plan provides an opportunity to re-start the capital plan and move forward on priority projects that will enhance the state of good repair of our buildings, infrastructure, and equipment, provide the necessary capacity for the delivery of City services, and grow our struggling economy.

Our infrastructure needs are ongoing and significant. We know from the experience of the 1970s that the cost of deferred maintenance is high down the road. Failing to invest today will only cost us more in the future, when schools are overcrowded and unsuited to modern learning needs, roads and bridges are deteriorated and unsafe, and antiquated equipment is dilapidated and unreliable.

Furthermore, construction creates jobs. Construction sector jobs in the city remain 13 percent below their level prior to the pandemic. Every billion dollars in construction spending creates nearly 5,000 direct construction jobs and hundreds of other indirect and induced jobs. With construction in the private sector forecasted to decline significantly over the next two years, according to the New York Building Congress, increased City government capital construction projects are both needed to help boost construction sector employment, and will be competing against fewer private-sector projects for resources and labor.

The City’s construction program is also a major source of contracts for minority- and women-owned businesses (M/WBE). In Fiscal Year 2020, the City paid nearly $1.1 billion to 455 M/WBE firms for capital projects. M/BWE firms have been among the hardest-hit during this economic downturn; a recent survey by my office found up to 85 percent of M/WBE respondents may not be able to keep their doors open for more than another six months. Among the most consistent asks of City government in our survey was a resumption of the capital program. As we steadily work to rebuild our citywide and local economies, restarting the City’s capital program would generate a pipeline of well-paid construction contracts critical to the survival and recovery of the city’s M/WBE community.

There is no need to pull back on capital spending on the basis of our current budgetary outlook or cash position. City cash balances remain robust, and, despite recent rating actions, our access to capital markets is excellent and we are consistently achieving attractive yields on our bonds. The bond refinancings that we have together undertaken since the start of the fiscal year have yielded over $600 million in budgetary savings.