NYC Crime for Week ending April 5: Most Crime Still Down – Burglary and Grand Larceny Auto Up

Now, nearly 5 weeks since the declared NYC State of Emergency and two weeks since Governor Cuomo’s Lockdown the latest NYPD Crime Stats are in. Last week we reported, for the week of March 23-29, how amongst the seven major felony offenses (Murder, Rape, Robbery, Felony Assault, Burglary, Grand Larceny & Grand Larceny Auto) there was a rise in only Burglary and Grand Larceny Auto.

Respectively speaking, over the course of three weeks from March 16 to April 5, Burglary in 2020 as compared with 2019 went from -0.6% to 2.5% then on to 20.3%. At first glance one might think it to be extraordinarily curious. I thought as much until I charted it out and realized how it wasn’t a matter of being a jump in the current year as it might’ve been simply a drop in the prior year of 2019.

The chart below shows how in 2019 the upward trend (Citywide) was broken in that year of 2019 as compared with this current year, thus explaining the percentile jump. Yet, of course, the NYPD may very well be finding it curious, for their own reasons, since a rise in crime is a rise in crime. Especially, when you think about how most of New York City is supposedly home during this pandemic. 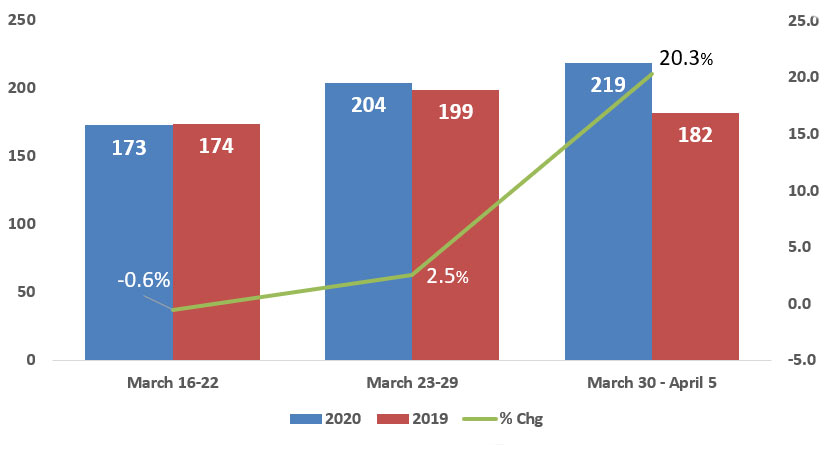 Refer to the Chart Below.

If one’s looking for extraordinary findings then it’s with Grand Larceny Auto. The Percentile differences between 2019 and 2020 shot up dramatically for this last recorded week (March 30 – April 5) for an increase of 76.5%.

There were, as well, a considerable rise in instances for this crime happening in that last week as compared to the previous two of March 16-22 and March 23-29.

When examining further into the instances by borough one finds nothing too striking except for one particular area. Looking at the chart below you’ll see how Queens South had quite the dramatic leap in Grand Larceny Auto. It went from 11 one week, 12 the following and on to 30 this last recorded week.

As mentioned, the last time we wrote about NYC’s Crime Stats, we’ve an interest in following up with this all on a weekly basis. Again, it’d be fascinating to see how crime will change in the weeks and months to come as we eventually make our way out of this mess of a pandemic.

Until then, please stay safe and wear your facial covering.