Nothing major to report except for the slight rise in Burglary as well as the increase in Transit Crimes city-wide, but we’ll get to that last item in a just a little bit.

For the latest examined week of April 20 – 26 GLA has gone down to 126 from the prior week’s 137 instances of theft. There was a 68% jump over 2019’s number but that’s nothing to make a big deal out considering how things have been over the past 5-6 weeks. Also, one has to consider how there was a big enough drop in that crime for the past two weeks in 2019, thus explaining that jump of 68% as compared with the prior week’s jump of 51%.

You’ll see what we mean in the chart below.

Nothing to be Concerned with GLA Borough-wise

The chart below shows nothing out of the norm. No major drops or rises for any one borough except for the dip in Brooklyn South.

As has been the case for the past few weeks, Burglary is continuing its steady, yet moderate rise. The differences between 2019 and 2020 are negligible. The week ending on April 26 had an increase in instances of 16 with the bulk, once again, being of commercial properties at night. One can only imagine that it’d be the case considering how many merchant businesses have shuttered due to the COVID-19 Pandemic.

There’s been talk in the media about how Transit Crime has risen despite the drops in ridership. Yes, in fact it has gone up. Even Governor Cuomo would chime in, wondering out-loud how such a thing was not mathematically possible.

Yet, it doesn’t take a genius to figure out how those willing to commit crimes are more likely do so with fewer witnesses and handheld recording devices, does it? Need I spell out how that works?

Anyhow, in a crazy way, the stats for 2019 during the past three week time-range had a sudden drop for the last examined week. For 2020, that same time range experienced a rise over the prior week. Thus, the percentage difference between 2020 and 2019, going from one week to the next might appear dramatic, when in reality it really isn’t. If you were to have a good look at the chart below you’d see how it really isn’t as great a deal as it’s being made out to be. The only thing that should be considered is the fact that crime in the transit system is going up just as it’s going up where burglary is concerned.

Yours truly has walked through midtown Manhattan in broad daylight when there were very few if any individuals walking about. I came across quite a few shady-looking characters. Why were they walking about? For what purpose? IF I were looking to rob someone or break the law in some way then what better opportunity that empty streets and fewer cops? Lately, the NYPD force is coming back to form with fewer cops calling in sick or being found as infected with COVID-19. 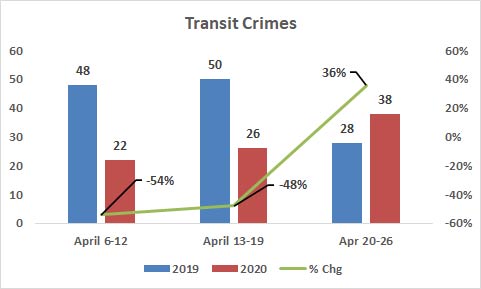