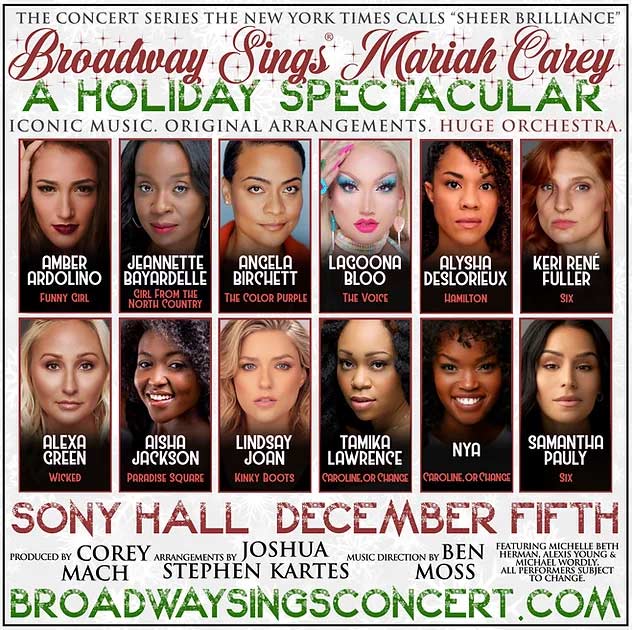 Learn about getting tickets on this official page…

What better way to celebrate Christmas, than a Broadway all-star original arrangement of iconic Mariah Carey holiday songs with a huge orchestra? The acclaimed Broadway Sings concert series praised as “sheer brilliance” by The New York Times returns to Sony Hall with a holiday spectacular on December 5th.

The Broadway Sings concert series reimagines, rearranges, and re-orchestrates the tunes of pop superstars to fit the strengths of major Broadway stars. Landed on Playbill’s “Best of the Year” lists for multiple years in a row, the series has incorporated over 300 Broadway performers, including 30 Tony Awards nominees.

Accompanied by a 14-piece orchestra, the cast will sing Christmas classics such as “Silent Night”, “All I Want For Christmas Is You” and “O, Holy Night”. Watch past Broadway Sings performances here:

Sony Hall opened in 2018 in the heart of New York’s Theatre District (235 W. 46th St at the Paramount Hotel, in the space previously known as Diamond Horseshoe), and is owned and operated by Blue Note Entertainment Group. Sony Hall presents world renowned performing artists across all music genres at capacities of 1,000 standing and 500 seated, with a full-service restaurant and bar. Sony Hall is equipped with Sony’s technologies integrated throughout the 12,000 square-foot venue to deliver enhanced entertainment experiences to audiences.