Free and Open to All 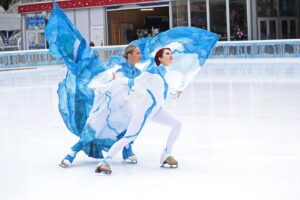 Ice Theatre of New York (ITNY) presents Winter 2022-23 City Skate Concert Series, starting with City Skate Concerts on January 10, 2023 at 11:50 am at the Bank of America Winter Village at Bryant Park. The series will continue on February 21, 2023 and the events are free and open to the public. For more information, visit this page…

Be dazzled by some of the city’s most talented skaters! Ice Theatre of New York brings breathtaking ice choreography performed by their young skating apprentices and professional ensemble members to The Rink. They invite you to the rink deck to watch this lunchtime performance.

Ice Theatre of New York’s mission is to celebrate and advance dance on ice as a performance art. Through its performances in both traditional and site-specific venues, ITNY presents ice dance that helps to open one’s eyes to seeing skating in new and unexpected ways.

When Atoms Embrace is an acclaimed solo choreographed and costumed by original John Curry Theatre of Skating member, Lorna Brown. Ms. Brown is an artist with a deep interest and knowledge in science. The piece is set to Music by Arvo Pärt’s “Spiegel im Spiegel” and was inspired by a poem Ms. Brown wrote herself: She comes to us in blue and lavender light which shines on us all to give mankind energy and love and to help and heal our planet. Lay me in a field of wildflowers, let the scent perfume the hours. When The Atoms embrace and time changes pace, I find my magical powers.”

ITNY former performer and current choreographer, Eliot Halverson, created Take Five for Armen Agaian to show off his ice dancing skills and he adapted it in 2022 for Danil Berdnikov.

Other repertory pieces may be added for the February performance, including Of Water and Ice.

Of Water and Ice

In the polar regions, a constant interplay takes place between H2O in its liquid and solid forms. Set to a DJ Spooky score, generated itself by the geometry of ice crystals and the math of climate change data, the dance explores what happens when this fragile balance of water and ice spins out of control. Choreography commissioned by the Ice Theatre of New York with the generous support of the New York State Council on the Arts.