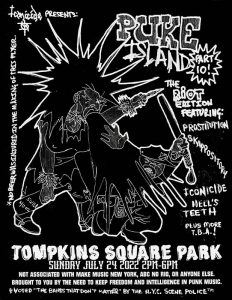 An event conceived and masterminded by former squatter Eric “Slug” Torres, the original Punk Island brought together over one hundred bands scattered haphazardly on thirteen stages across Governor’s Island with no consideration, other than the headline stage, for stylistic, scene, political, racial/cultural/ethnic, or any other affiliation.

In the spirit of the Beer Olympics, an all day event spearheaded by, among others, Slug’s friend JohnnyV from New York Scumrock band Public Nuisance, the goal was Anarchy in Action. Purposely by accident, event goers wandered around from stage to stage, seeing and hearing things they never would have expected.

The event was such an overwhelming success it was demanded a second be held, and a third. By the fourth year however, Slug was looking for someone to take the helm and direct the monster he had created. Those he had enlisted on the previous year, including Stephanie Plungis, were ready to move on. So what was Slug to do, but enlist an entity he believed perfect for the job: ABC No Rio.

Fourteen years after its inception, Slug’s brainchild resembles the original event in name only. Bands are combed over ideologically and categorized by affiliation, in a newfound form of conservatism that has had organizers accept funding from none other than media mogul and malignant billionaire Michael Bloomberg (look it up). As further evidence of moral temerity (look that up too), ABC No Rio accepted donations totaling over Six Million Dollars to renovate its (now former) home at 156 Rivington Street, initially as a “multi purpose” building split between business and residential tenants, only to allow it years afterward to lay dormant as just another vacant lot, while the money trail has transparently grown cold. This year’s edition of Punk Island will be held in Maria Hernandez Park, located in the formerly low income neighborhood of Bushwick Brooklyn, which has finally been gentrified and hipsterized enough to host the current version of the event.

Established in 2010 by the band Iconicide, PUKE ISLAND aims to remind people of the way it used to be. Sticking to one’s own kind may be fine for xenophobes and cultural isolationists, but it has no home in punk rock. NONE of the bands performing on this event have ANYTHING to do with one another, other than two simple words: GOOD MUSIC.

THIS TIME AROUND Puke Island delivers two history lessons rolled into one. This year’s event falls significantly close to the 34th Anniversary of the Tompkins Square Park Police Riots of 1988; another event many have forgotten, or the significance of which they have lost sight. Orchestrated by then mayor Edward I. Koch, Community Board 3 and the NYPD’s 9th Precinct, these planned purges of vibrant, multi ethnic and otherwise electric street culture marked the Beginning of the End, and heralded the forcible transformation of scores of previously working class/artist neighborhoods into playgrounds for the rich. For any who ask, NO we did not choose this date so it would happen the day after (allegedly) Punk Island. We did it to avoid them.