A Celebration of and for LGBTQIA+ and ally teens 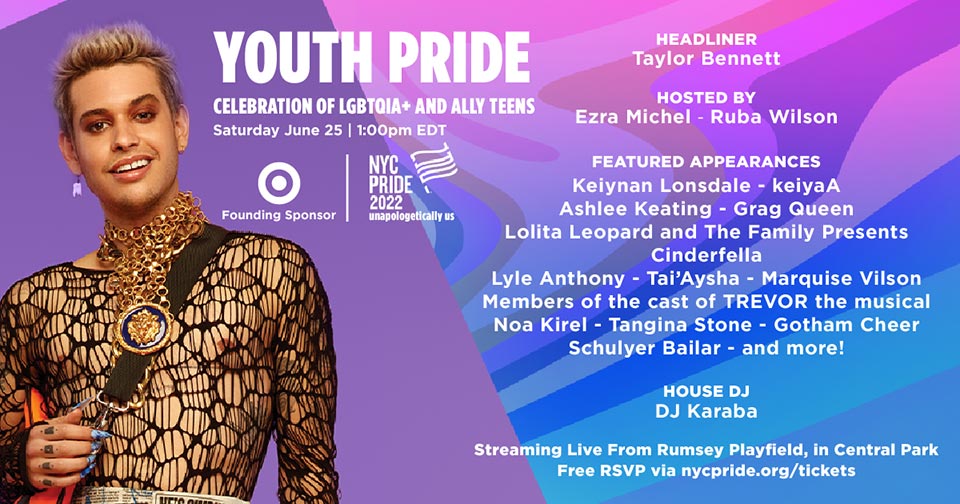 ‍Taylor Bennett is a multi-genre artist and LGBTQ advocate whose new album Coming of Age seamlessly blends alternative, rock n’ roll, hip-hop, R&B and more. Taylor and his Grammy winning brother Chance grew up on the south side of Chicago. In 2017, Taylor came out as bisexual to publicly voice his continued support for the LGBTQ+ community. With his “Be Yourself Pt.2” song and his apparel collection Be Yourself, which continues to sell out, Taylor wanted to inspire and celebrate our differences. He hopes to show that no matter who you like, no matter what race you are, no matter where you are from, it is all about love.

This year’s Youth Pride comes at a time when queer affirmation is needed most for young LGBTQ+ people. The past several years have seen a growing, and in the past year escalating, series of attacks on LGBTQ youth and families, in particular transgender and non-binary youth. States across the nation are introducing – and passing – legislation that censors inclusive curriculum in school, notably the infamous “Don’t Say Gay” law in Florida. Trans youth and their families are being directly targeted with laws that ban participation in sports and, even more devastating, laws that restrict access to trans-affirming health care and even extreme measures that criminalize a family’s decision to support and affirm their child’s gender identity. NYC Pride is committed to creating safe spaces for queer youth to gather in community and to love and live their truth.

Youth Pride is produced in partnership with founding sponsor Target, It Gets Better, Sound Mind, Gotham Cheer, Thayers, and GLSEN.

“We are thrilled to be back in-person to partner with NYC Pride for this year’s celebration of Youth Pride.” said Eboni Munn, Director, Brand Marketing, Content & Creative at It Gets Better. “Building a sense of community with LGBTQIA+ teens and allies while uplifting and empowering the dynamic voices of Gen Zers aligns with the very core of our mission.”