Popular New York summer institution is now in its 27th year on the Lower East Side.

Two weeks only at 7:00 pm each evening 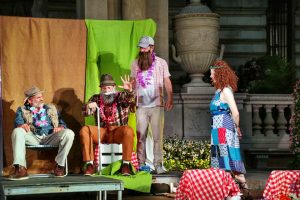 “The Winter’s Tale” is regarded as one of Shakespeare’s “problem plays” because its first half bristles with psychological drama while its second half is comedic and supplies a happy ending. A synopsis of the play follows below.

Director Hamilton Clancy has couched the play in the modern world to reflect the tensions of our time. Jealous King Leontes, the play’s central character, cannot accept truth that is self-evident and issues of probity and deception dominate the play, as in America today.  Clancy asks, “What proof do you need to know something is a lie?  And how easily will we accept a lie if it suits our expectations?”  He asserts that the January 6 Committee’s hearings made this aspect of the play impossible to ignore.

The concept of the production is to adapt Leontes’ kingdom of Sicilia to contemporary New York City, with its Wall Street icons and executives. (Kings, you see, are much like Wall Street power brokers.) The sterility of their lives is represented by a sleek clean white backdrop.  Color is reintroduced to suggest Bohemia, the verdant land they retreat to for renewal. But the region is re-imagined as the Hudson Valley of upstate New York, with apple-picking replacing the play’s sheep shearing festival.  This gives the company a chance to include some comic contemporary references, which Parking Lot shows are known for.

Where the adaptation gets complicated is the notion of shame.  In “The Winter’s Tale,” the central character becomes repentant for his wrong doings.  Clancy observes that Leontes’ counterparts in modern America currently exhibit no such repentance or shame.

Leontes is played by Clancy, who is founding Artistic Director of The Drilling Company and the most prolific director and producer of Shakespeare in the Parking Lot. and appeared as Hamlet, Henry V, Julius Caesar, Petruchio and Benedick, among others. He’s been seen in film and television as Kowalski in “Orange is the New Black” (SAG Award Best Ensemble Seasons 2&3), Tom in “One Dollar” and Peck in the Coen Brothers’ “Burn After Reading.” Other on-camera credits include “Blue Bloods,” “Bull,” “Billions,” “Mindhunter” and “Gotham.”

The cast also features Jane Bradley as Hermione. Parking Lot regulars will recognize her from her appearances in “As You Like It,” “Twelfth Night,” “The Merchant of Venice” and “Othello.”  In “As You Like It” (2015), she earned high praise from the New York Times (Ken Jaworowski), who called her Rosalind  “marvelous…wonderful by any standard.”  Una Clancy, who appears frequently in productions of Irish Rep, plays Paulina. Also featured are Drew Valins as Autolycus, Bradford Frost as Polixines, Dave Marantz as the Old Shepherd, Meg Hennessey as Perdita, and Patrick Hart as Florizel.  The ensemble includes Lizabeth Allen, Robert Arcaro, Jack Sochet and Jaan Rothschild.  Set design is by Jennifer Varbalow.

Admission is free. Chairs are provided on a first come, first served basis and audience members are welcome to bring their own. Since the performance is outdoors, masks are not required but audience members may use their own discretion.

The Drilling Company’s Shakespeare in the Parking Lot has been a Lower East Side neighborhood institution for 27 years.  Its concept–presenting Shakespeare plays with a “poor theater” aesthetic in a working parking lot–is now widely imitated around the US and around the world, with productions as far away as New Zealand.  In 2020, the attraction was suspended due to the Covid-19 lockdown but returned last summer with “Two Noble Kinsmen.”

The Clemente Soto Vélez Cultural & Educational Center Inc. is a Puerto Rican/Latinx multi-arts cultural institution that demonstrates a broad-minded cultural vision and inclusive philosophy rooted in NYC’s Lower East Side/Loisaida. While focused on the cultivation, presentation, and preservation of Puerto Rican and Latinx culture, it is equally committed to a multi-ethnic / international latitude, determined to operate in a polyphonic manner that provides affordable working space and venues to artists, small arts organizations, emergent and independent community producers that reflect the cultural diversity of the Lower East Side and our City.

For info on other upcoming Drilling Company productions call 212-873-9050 or visit www.drillingcompany.org.

Rainout notices for Shakespeare in the Parking Lot will be posted on www.shakespeareintheparkinglot.com and www.drillingcompany.org.

SYNOPSIS OF “THE WINTER’S TALE”

“The Winter’s Tale” is  one of Shakespeare’s final plays that are often classified as “romances” because they are part tragedy and part comedy.  The passion of its jealous king almost parallels Othello’s, but ultimately the sun shines forth and the tragic gloom is dissipated.  Leontes, king of Sicilia, irrationally and stubbornly suspects his wife, Hermione, of infidelity with Polixines, his childhood friend who is King of Bohemia. Leontes’ passion is unreasonable and obsessive. He seeks to poison his friend, who escapes, leaving the king’s jealousy to concentrate on Hermione. Leontes throws her into prison, where she gives birth to a daughter.  The newborn is disowned by the king, who commands that she be abandoned on a foreign shore (it turns out to be Bohemia). The Delphic Oracle proclaims Hermione’s innocence, but Leontes is not convinced of this until the death of his heir and the reported death of his wife. The baby he ordered abandoned, Perdita, is miraculously adopted by an old shepherd. Years later, she attracts Prince Florizel of Bohemia as a suitor. His father, Polixines, opposes the match, thinking it unequal. The lovers flee to Sicilia and a happy solution occurs.