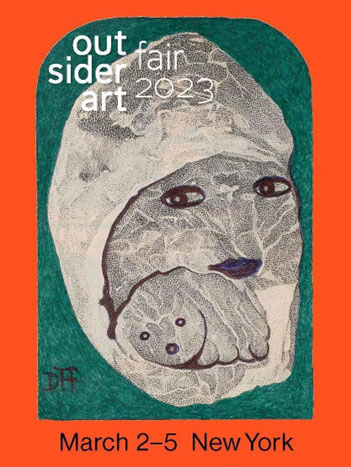 This year’s fair will feature a collaboration with the Birdsong Project, and a solo exhibit of paintings by Paul Laffoley

(New York City, NY – December 13, 2022) – Outsider Art Fair, the only fair dedicated to self-taught art, art brut and outsider art, is pleased to announce details for its 31st edition, taking place March 2-5, 2023 at the Metropolitan Pavilion in Manhattan and featuring 64 exhibitors from 28 cities in 8 countries, with 12 first-time exhibitors.

Since 1993, the Outsider Art Fair has championed self-taught artists from around the world. Returning dealers who have been with OAF since its inception include Aarne Anton / Nexus Singularity (New York), Cavin-Morris Gallery (New York), Fleisher/Ollman Gallery (Philadelphia),

Among this year’s fair highlights, Donald Ellis will present an early group of graphite and coloured pencil drawings by Inuit artist Parr (1893-1969), celebrated today for his unadulterated depictions of the hunt, animals and the human figure. First time exhibitor Feheley Fine Arts (Toronto) will also feature works by Inuit artists. SHRINE (New York) will showcase the work of Mary T. Smith (1904-1995) and David Butler (1898-1997), two exemplary figures in the Southern tradition of “yard shows,” where Black artists decorated their properties to convey messages that could not be openly voiced; and first-time exhibitor Valley House (Dallas, TX), who will present a mini-retrospective of Texas self-taught artist Valton Tyler (1944-2017).

For this year’s OAF Curated Space, the fair has joined forces with Grammy Award-winning music producer and supervisor, Randall Poster, who has co-founded The Birdsong Project, a collaboration with some of the world’s most respected musicians, artists, poets, and actors, to support The National Audubon Society. Poster and fair owner Andrew Edlin, who have been friends since childhood, will co-curate an exhibition, We Are Birds, featuring dozens of works inspired by birdlife made by self-taught and contemporary artists, including Greg Burak, Minnie Evans, Tony Fitzpatrick, William Hawkins, Chris Johanson, Pam Lins, Eleanor Ray, Fred Tomaselli, and Bill Traylor. The project recently released For The Birds, an art-filled, 20-LP box set containing over 200 tracks of original music and bird-related poetry by composers and performers including Yoko Ono and Anohni, Elvis Costello, Laurie Anderson, Yo-Yo Ma, Beck, and Kamasi Washington, with avian-themed verse written by poets and read by actors and artists including Tilda Swinton and Robert Pattinson. Recently, The Birdsong Project presented an exhibition at the Brooklyn Botanical Garden that featured over 30 bird houses designed by a range of notable artists, architects, and designers, such as Tom Sachs, Nina Cooke John, Misha Kahn, and Suchi Reddy.

Another highlight of this year’s fair will be a special presentation of The Life and Death of Elvis Presley: A Suite by visionary American artist and architect Paul Laffoley. The series of eight complex paintings, completed in 1995, represents the artist’s interpretation of the distinct phases in the life of Elvis Presley.

Newly appointed fair director Sofía Lanusse remarked, “I’m excited to build upon the creative momentum generated by the fair and keep challenging the boundaries of the field, which OAF has become celebrated for.”

OAF Talks will feature two panel discussions, one on Minnie Evans moderated by MoMA curator Esther Adler, the other on Paul Laffoley organized by Douglas Walla, CEO of Marlborough Gallery, New York, and editor of The Essential Paul Laffoley: Works by the Boston Visionary Cell (University of Chicago Press, 2016). Further details to be announced.

This year’s Online Viewing Room (OVR) will be powered by exhibit-E, a dedicated platform to discover and buy from galleries on a global scale and connect with art lovers and collectors.

About the Outsider Art Fair:

In 2012, Wide Open Arts, a company founded by gallerist Andrew Edlin, acquired the fair. Propelled by its immediate success in New York, a Paris edition was inaugurated in October 2013, helping to reinvigorate that city’s long tradition in the art brut field.

Wide Open Arts is dedicated to providing access to everyone. If you require assistance during your visit, please contact us at [email protected] for more information.