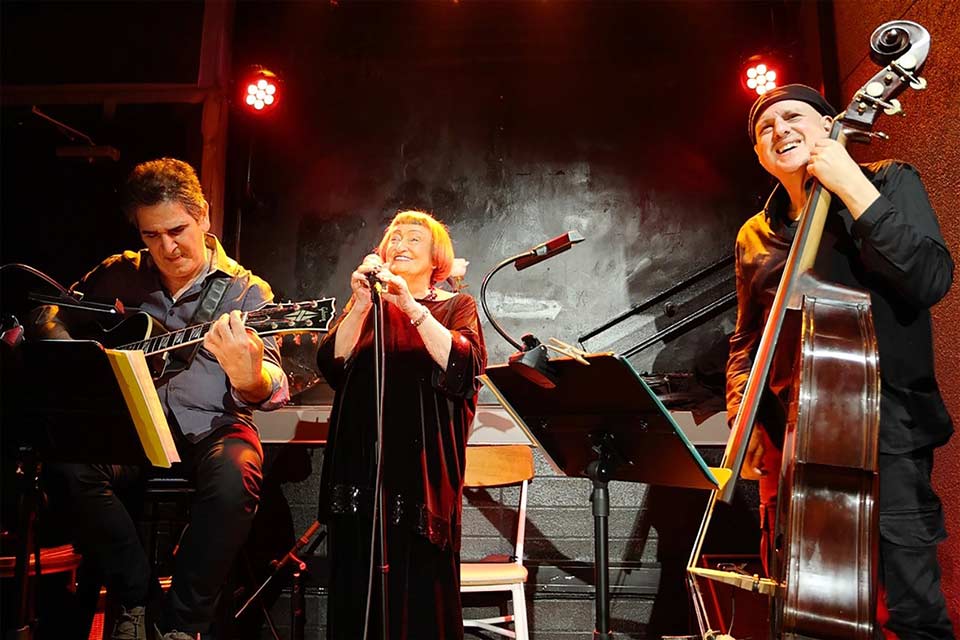 (Flushing, New York)— On Friday, December 2 at 8:00 PM, Flushing Town Hall will pay tribute to one of the greatest NEA Jazz Masters with Songs for Barry Harris, featuring NEA Jazz Master Sheila Jordan, bassist Harvie S, and jazz guitarist Roni Ben-Hur. The trio will perform jazz standards and tunes Barry Harris played throughout his phenomenal career and share unique stories and memories about the outstanding jazz luminary for the anniversary of his passing.

Master Harris died one year ago, in December of 2021, at the remarkable age of 91. He gave his final public performance at Flushing Town Hall’s 15th annual NEA Jazz Masters concert just one month prior.

All three featured performers have a very special connection to the late Dr. Barry Harris. Sheila Jordan grew up in Detroit and knew Dr. Harris as a teenager; they remained good friends across the decades. Roni Ben-Hur started out as a student of Dr. Harris, later playing in his band and recording some classic albums with him. Harvie S played with Dr. Harris over many years and taught with him in summer programs at the Manhattan School of Music. Audiences can look forward to a very moving and uplifting tribute to the influential Jazz Master.

Raised in poverty in Pennsylvania’s coal-mining country, Sheila Jordan began singing as a child, and by the time she was in her early teens, she was working semi-professionally in Detroit clubs. Her first great influence was Charlie Parker. After moving to New York in the early 50s, she married Parker’s pianist, Duke Jordan, and studied with Lennie Tristano, but it was not until the early 60s that she made her first recordings. By the late 70s, jazz audiences had begun to understand her uncompromising style a little more, and her popularity increased. Jazz journalist Scott Yanow describes her as “one of the most consistently creative of all jazz singers.”

Jazz guitarist Roni Ben-Hur has earned a sterling reputation as a musician and educator, renowned for his golden tone, improvisational brilliance, compositional lyricism, and ability to charm peers, students, and listeners alike. Eminent jazz critic Gary Giddins wrote in the Village Voice: “A limber and inventive guitarist, Ben-Hur keeps the modernist flame alive and pure, with a low flame burning in every note… [He’s] a guitarist who knows the changes and his own mind.” Ben-Hur – born in Israel in 1962 but a longtime American citizen, now based in New Jersey – has released nine albums as leader or co-leader, with Time Out New York calling him “a formidable and consummately lyrical guitarist.” The Star-Ledger of New Jersey summed him up this way: “A deep musician, a storyteller, Ben-Hur works with a warm, glowing sound and has an alluring way of combining engaging notes with supple rhythm.” Along with releasing acclaimed educational products – including the instructional DVD Chordability and method book Talk Jazz: Guitar – Ben-Hur has directed international jazz camps for nearly 15 years. Jazz guitar star Russell Malone got it right when he said: “Everything Roni does is beautiful. He has the magic touch.”

Barry Harris was a magnificent American jazz pianist, bandleader, composer, arranger, and educator. Among the many honors and recognitions he received during the course of his life, Harris was named an NEA Jazz Master in 1989 by the National Endowment for the Arts. He was America’s oldest, living jazz professor and was said to be the world’s jazz professor, as he demonstrated his theories and methods in workshops and seminars across the globe and online. Master Barry Harris first joined Flushing Town Hall’s NEA Jazz Masters series in 2007 alongside Clark Terry, Jimmy Heath, Tootie Heath, and Benny Powell. When at times, health challenges prevented his participation in subsequent concerts in our series, he generously invited NEA Jazz Master pianists Jo Anne Brackeen and Kenny Barron to take his place, helping bring more living legends to our beloved corner of Queens. He was beloved by Flushing Town Hall’s staff and audiences.

“The esteemed Barry Harris graced our stage on multiple occasions over the years, and we are honored that he shared his talents with our audiences,” says Executive & Artistic Director Ellen Kodadek. “Sheila Jordan, Harvie S, and Roni Ben-Hur have all known Master Harris for many years, and I know that they will deliver a fantastic and heart-warming tribute to the great person and musician he was.”

The concert on December 2 begins at 8:00 PM. For those unable to attend in person, the performance will also be live-streamed online on YouTube for $10. Tickets are $40/$32 members/$20 students w/ID. Table packages for two w/ refreshments are available for $130/$110 members. For more information or to purchase tickets, visit https://www.flushingtownhall.org/songs-for-barry-harris.