Flushing Town Hall will welcome the Year of the Rabbit with its presentation of This is Home, a Lunar New Year Photo Exhibition 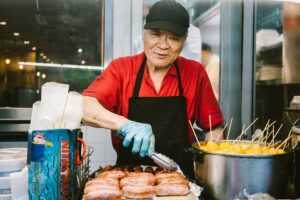 (Flushing, New York)— Flushing Town Hall will welcome the Year of the Rabbit with its presentation of This is Home, a Lunar New Year Photo Exhibition, opening with a reception on Saturday, January 21, and running through February 26. Featuring the works of New York City-based photographers Janice Chung, Cindy Trinh, and An Rong Xu, the exhibition tells a visual story of the Asian American and Pacific Islander (AAPI) communities: how they live, work, love, and when needed, stand up for what they believe.

Janice Chung is a Korean American photographer born and raised in Flushing, Queens. Chung amplifies and deconstructs her Korean American heritage through her work by capturing deeply personal moments. In doing so, she sheds light on the intricate details of immigrant and diasporic life while straddling the two places she calls home, New York and South Korea. Her previous series Han in Town, which showed at Flushing Town Hall, celebrated the community that raised and supported her.

Cindy Trinh is a New York-based photographer and photojournalist passionate about art and social justice. Trinh, who is the daughter of Vietnamese refugees, uses her photos to show the lives of Asian Americans living in Chinatown and Flushing. She captures vendors and shopkeepers at work and highlights protests by Asian Americans over the violence and racism their community has faced.

An Rong Xu is a New York City and Taipei-based photographer and director. Born in China and raised in New York City’s Chinatown, Xu explores the world around him through his unique cultural perspective. Xu’s work is rooted in the beauty of the ordinary, capturing a rich cinematic stillness in his photography and a passionate ethereal journey in his films. His series My Americans tells the stories of Chinese Americans who have fought to keep their culture, hopes, and dreams alive while building a new life in a foreign land. Selections from Xu’s New Romantics series create emotional narratives to reflect on our relationship with the world and what we’ve learned through love, loss, and human connection

“Our neighborhood, and New York City more broadly, is home to vibrant and diverse Asian and Asian American communities.  We are proud to showcase their stories as told by these three talented NYC-based photographers at Flushing Town Hall’s gallery during the Lunar New Year,” said Flushing Town Hall’s Executive & Artistic Director Ellen Kodadek.

“The past few years have been difficult with increased violence and racism against Asian American in New York City during the pandemic,” says Flushing Town Hall’s Director of Art Services, Daniel Bamba. “This exhibition celebrates the AAPI community’s resiliency in the face of those challenges, and to borrow from one of the protest signs pictured, ‘We Are Stronger Together.’”

Flushing Town Hall will be celebrating the Lunar New Year all month long. Other Lunar New Year events this month include “Thump Thump” Rabbit Coloring Workshop on Saturday, January 21, at 3 PM and two special family-friendly performances of “Hao Bang-ah, Rabbit!” by Chinese Theatre Works on Sunday, January 29, one at 1 PM and 3 PM, each followed by an optional workshop.

Lunar New Year is the grandest traditional festival in Asian cultures, marking the start of a new year for those whose months are moon cycles. Each year is represented by one of 12 Zodiac animals, and 2023 is the Year of the Rabbit, beginning January 22. The Rabbit is known to be the luckiest of all of the zodiac animals, symbolizing character traits such as creativity, compassion, and sensitivity.