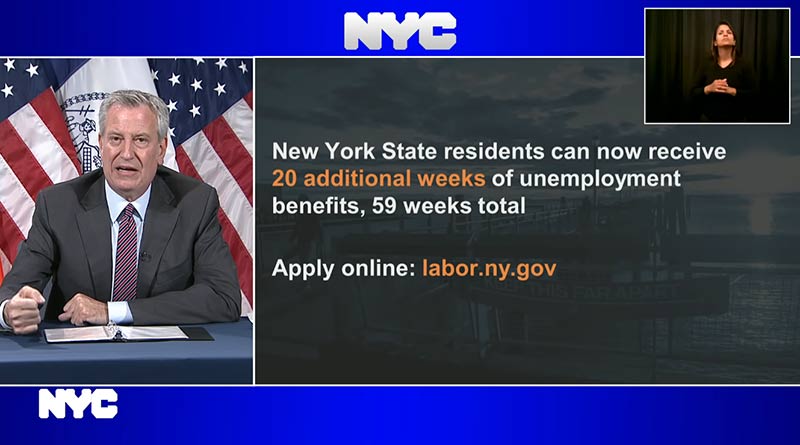 For those interested, visit this page at the NY Department of Labor. As well as this one here: https://dol.ny.gov/

NYC Mayor Bill de Blasio today brought attention to the Extended Benefits Program offered up by the New York State Department of Labor which became effective early this month of July. His mention would come amidst a discussion on the dire economic situation the nation’s found itself in with the COVID-19 Crisis and the news of the steep fall taken by the GDP (as announced by the Department of Commerce this morning).

“Now, while our federal government isn’t acting, I want to give credit to New York State, because they’re doing something that’s going to reach a lot of people. And eligible New York State residents will have an opportunity to get additional unemployment benefits, up to 20 additional weeks of unemployment benefits,” said the Mayor.  “That’s crucial for a lot of families. So, anyone who qualifies for this, please take advantage of this right away. You can go online at labor.ny.gov and get that support.”

NY Governor Cuomo this past Sunday:

“The other issue that we have to focus on this week is the Washington aid package. The $600 unemployment check ends. That is going to really cause havoc and tremendous distress for people. If the unemployment stops, Washington is playing politics, they have gridlock. The Republicans don’t even have a proposal on the table. But they’re about to end unemployment for people. State and local, there’s still no progress. There is no economic analyst who will say it’s good for the economy to starve the states and local governments. They’ll say the exact opposite.”