On April 14, 2020, Mayor Bill de Blasio would visit the city’s largest food pantry, Campaign Against Hunger, located in the Bedford-Stuyvesant section of Brooklyn. He would thank them for the work they’re doing to provide food to New Yorkers. Folks in need, who are suffering economically due to the effects the Coronavirus Pandemic has had on our city.

Holding an orange bag in the air, the Mayor says, “…what’s inside this bag is food that’s going to keep families together, it’s going to protect people who never expected to be in this situation.  Imagine if out of nowhere, you lost your whole livelihood and there was no food to eat – and along comes Campaign Against Hunger with this food.”

The Mayor would state how a half million New Yorkers have lost their jobs, lost their livelihood and are struggling right now.

“I want to thank all of you. You’re doing such important work. Literally, what you’re doing is so crucial. Keeping people alive, keeping them healthy – and I want you to know the pledge I will make to you. We will not let any New Yorker go hungry…what we are focused on today are beautiful organizations, like the Campaign Against Hunger. Community based, connected to the people, grass roots, making a difference – and we work with the city council to ensure there’ll be millions of dollars – 25 million dollars to support local food pantries,” the Mayor said.

Video of the Mayor’s Visit to the Pantry today

On Friday, April 10, the Mayor along with the NYC Council Speaker Corey Johnson announced how the city would provide $25 million in emergency funding to emergency food providers across the city.

“We thank the de Blasio administration for moving quickly on the Council’s calls for help for food providers two weeks ago. This funding, combined with the $25 million the state pledged in response to the Council’s request, will pay for over 19 million meals. We must continue to do everything we can to prevent a hunger crisis in New York City. No one should be food insecure in the richest city in the United States,” said Speaker Corey Johnson.

The Mayor would then introduce the organization’s founder, Dr. Melony Samuels mentioning, “it started in a church basement – grew into something amazing – serving hundreds of thousands”. Motioning to the other volunteers and workers present this day, the Mayor called them all heroes for making sure that families could get food.

On March 21, the Mayor announced that Kathryn Garcia (who was also present at today’s event) would serve as the COVID-19 Food Czar.

“”The City’s Food Czar team, overseen by Commissioner Kathryn Garcia, has been doing direct outreach to pantries to understand their needs, and this funding will cover critical immediate operating expenses such as increased food costs, additional staffing, new safety supplies, and the ability to deliver food items directly to seniors who are now homebound. More than 800 organizations citywide, including pantries, mobile pantries, soup kitchens and non-profit organizations, may be eligible to receive emergency funding for these critical operating expenses. The Food Czar team, in partnership with New York City Human Resources Administration/Department of Social Services, will begin outreach to let food pantries know how to access these newly available emergency funds.””

“”The City also has several emergency food programs underway, including DOE Grab-and-go meals at over 400 sites across the city that are open to all, senior meal deliveries, and deliveries to vulnerable populations in need through nyc.gov/GetFood. The additional funding for emergency food providers will ensure these vital organizations have the funding they need to stay open throughout this crisis and feed an unprecedented number of New Yorkers in need.””

The online page mentioned above can be found here; created in response to the COVID-19 health crisis.

Some of the Team at Campaign Against Hunger 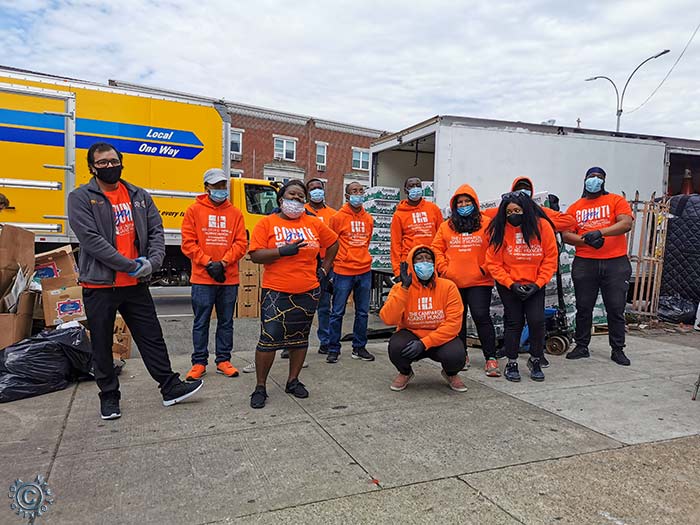