Update – April 11, 2020: Governor Cuomo, during his briefing, was asked about hospitals being at capacity and how people are being turned away. People who would otherwise have been hospitalized a few weeks ago.

His response: That’s not True. It defies all logic. The high point of hospitalizations  was two weeks ago. That’s when we had the crush on the hospitals. We have been down on the down-slide for awhile now. We have empty beds right now in hospitals over the past couple of days. They wouldn’t be turning away anyone. That’s virtually an impossibility.

Another person of authority (the name and role of whom we’re not aware) at the table with the Governor stated that they were in constant touch with the hospitals on an hourly basis and that no such thing was taking place. Also, anyone in need of hospitalization would be shuffled around to where the demand(s) could be met.

NYC Mayor Bill de Blasio had a few things to say about Councilmember Mark Levine’s during today’s COVID-19 Press Conference. Mr. Levine made a claim on Twitter about very sick people being turned away at hospitals for pneumonia-like symptoms. Due to the Coronavirus pandemic that’s been hitting the city hard. The Mayor was asked if there was some truth to the claim. He denied it and had plenty more to say about the councilman.

Mark Levine is Councilmember for 7th District of the New York City Council and chair of Council Committee on Health. Today he tweeted the following:

“NYC hospitals have turned into a giant ICU for covid. They are turning many people away. There are people being sent home with pneumonia-like symptoms with an oxygen compressor. This is unprecedented.”

“This is such a hugely important point that most of us have been missing. Hospitals are turning away more and more people–including some that are very sick. So data on how many are hospitalized is in effect yet another big undercount.” 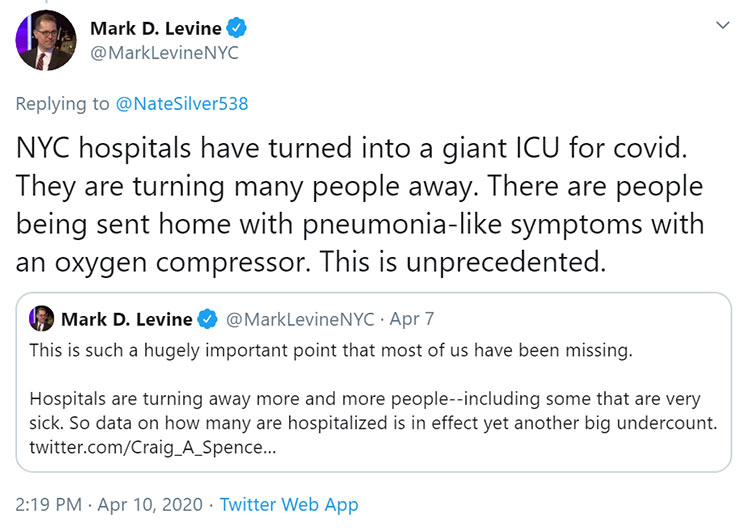 The mayor was asked about this and he responded by also referring to the councilman’s statement earlier in the week. It was on April 6 that Mr. Levine posted a tweet suggesting that COVID-19 burials would take place within NYC’s Parks.

The reporter was then asked by the Mayor to clarify the name of the person who’d made the claim. She obliged by making it clear that it was Mr. Levine.

“I know who it is, but I want to hear you say the name. Listen, with all due respect to the Council Member, who is someone I actually appreciate and admire over years, but I was very distressed by his statements earlier in the week that were patently inaccurate and actually very unhelpful to the City of New York, and I had a very blunt conversation with him about it. So, I don’t know what is going on with him, but saying that our hospitals would turn away someone with pneumonia is irresponsible, inaccurate, and unfair.”

The mayor then turned to Mitch Katz, President and Chief Executive Officer of NYC Health + Hospitals, to chime in.

“We are not turning away anybody with pneumonia who is short of breath. We do tell people who have mild symptoms that they are safest and most comfortable at home, but anybody who has shortness of breath needs to be in the hospital.”

“Yeah, I think it’s really an insult to our health care professionals. I would ask the Councilman to think about the import of his words. He is suggesting that doctors and nurses and clinicians would not care enough about a patient, pneumonia for God’s sakes. These people are working night and day, giving their heart and soul to save everyone, of course, if someone has pneumonia, they’re going to help them. And if he has evidence of a specific case, I want to hear that evidence. I want names and dates and places. Not this madness. It’s irresponsible.”