NYC Mayor de Blasio: “I Want Every New Yorker to get Tested”

Today during his daily COVID-19 Press Conference, NYC Mayor Bill de Blasio stated that he wanted every New Yorker to get tested. Just as he’s stated many times in the past weeks it would be for the sake of helping the city get through the Novel Coronavirus Pandemic. “Testing, Testing, Testing,” he would say.

The Mayor also introduced Mobile testing which would first head out to a couple of NYC neighborhoods and then travel to other parts of the five boroughs.

As for his wanting everyone within our city to get tested, I asked the Mayor on May 17, “Do you hope for a day when every single New Yorker can be tested regardless of having ever been symptomatic or having ever been in touch with anyone who tested positive?”

The Mayor, “I would love nothing more than the day to come when that could be truly as universal as we want it to be.”

“Last week we had a day where 33,000 people got tested in one day in NYC. That’s the highest we’ve had since the beginning of this crisis. We intend to keep building that number up to at least 50,000 a day.

Now, the message is I want every New Yorker to get tested. More and more testing capacity is out there in our community. Go take advantage of it. It will help us to move forward.

Today we announce something really important, that will be Mobile Testing in NYC. Mobile Diagnostic Testing. So you can literally stay in your neighbhorhood and the testing trucks come to you. We’re starting in two neighborhoods. Next week, Soundview in the Bronx, Kew Gardens in Queens. We’ll be moving around to neighborhoods all around the city.”

The Mayor would further add that this initiative begins with two trumps and is expected to be ramped up to 10 trucks in the next few weeks. Each truck would be able handle 80 tests per day.

He reminds everyone that the tests are free. 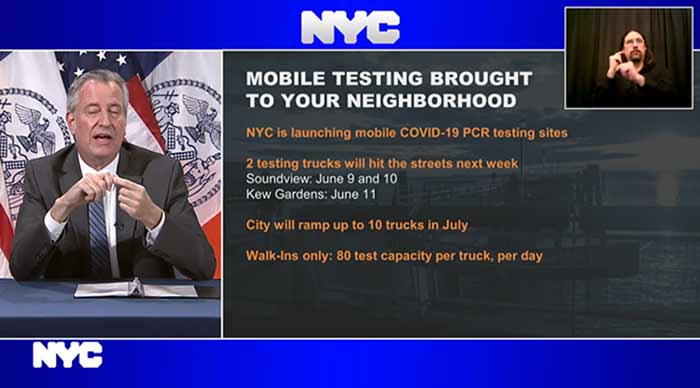