“Our federal government used to know this. A great New Yorker, Franklin Delano Roosevelt, used that concept of giving people jobs in their hour of need, that was one of the most foundational ideas the New Deal. That’s how we got out of the Great Depression,” said the Mayor.

Today, during his press briefing, NYC Mayor Bill de Blasio would liken President Trump’s actions, or lack thereof, to that of a tyrant. The words came as the Mayor was discussing the state of the nation, and of New York, as multitudes of citizens were on the verge of losing their additional unemployment support from the federal government.

Mr. de Blasio’s briefing began with talk about that which was reported by the US Department of Commerce’ Bureau of Economic Analysis this morning – how the Gross Domestic Product had dropped at an annual rate of 32.9% 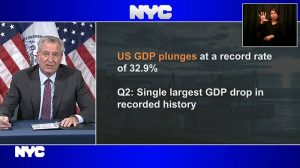 “So, the news this morning, the single largest drop in the gross domestic product of this nation in its history,” said Mayor de Blasio. “That’s what we’ve lived through over these last five months. It’s almost impossible to comprehend.”

He would continue on by discussing the oncoming expiration of the unemployment assistance, from the federal government, which so many citizens had depended upon.

The city and state have suffered extraordinary economic losses due to the lockdown brought on by the COVID-19 crisis and the resulting massive loss of jobs.

Yet, calls for help from local leaders have gone unheard. For weeks, NY Governor Cuomo has repeatedly called upon both the Senate and the President to do the right thing in helping states get through the crisis. Mayor de Blasio has also frequently called attention to our present day resemblance to the Great Depression, something he’s referenced dozens of times since the crisis began in March.

Audio of the Mayor’s related speech. Transcript follows below.

“What we need right now more than ever is the federal government to remember the lessons of history and step up and invest in the American people, invest in people here in New York City, do something decisive. And instead, we see the exact opposite. The Senate majority, blocking a new stimulus bill. This is – you know, we often talk about paralysis and Washington, gridlock in Washington – this is not gridlock, this is sabotage. Literally standing in the way of a stimulus when people in this country are in desperate, desperate shape, and it can’t go on like this. We all, every one of us, regardless of our party affiliation, regardless of what our lifestyle is, our place in the economy, where we live, whatever it is, we all with one voice need to say the federal government must provide a stimulus immediately to save this country and save this city. And we are not seeing that from the U.S. Senate. So, now, this is where I would normally call upon the chief executive officer of our country to do something. That’s exactly what it would take. Literally, a few sentences out of Donald Trump’s mouth would change the reality in the U.S. Senate. All he would have to do is care enough to say the Senate must provide that unemployment support to every-day Americans. The Senate must put the money in to revive our economy, bring us back, help cities and states be whole. If he just said that, it would happen – and he will not say a word. But is he saying today? He’s suggesting that the fall election should be postponed. Now, let’s be plain. This is the act of a tyrant, a president who in the midst of crisis has not taken responsibility for the lives of his people – the fact that folks are losing jobs right and left, people are hurting, he’s taken no responsibility for that, he’s only trying to save his own skin. And he knows he’s going to lose the election, so he’s calling for it to be postponed, which has never happened in the history of the United States in times of war or peace, depression, you name it. We do not postpone our national elections.”

“So, I think a lot of people, even some people had supported President Trump are going to look at that and say, no, that is abrogation of responsibly, but, more importantly, that’s in the assault on our democracy and it cannot stand. We need to have that election on time. We need to have the election so the American people can make their decision. That election has less than a hundred days away. A new government is less than six months away, potentially, that could help us to move forward. So, that election must happen. But, in the meantime, every one of us needs to fight for that stimulus. And think about, again, the human reality for so many families, what it’s going to mean to no longer have the support they were getting. Just to think about what people will not be able to afford. There are families right now, working class families, even middle-class families trying to choose between food or medicine or the basics of life. And those choices are going to get tougher and tougher.”