Today, Mayor de Blasio and his staff would post tweets concerning large gatherings having taken place within the Williamsburg section of Brooklyn. He would also state how he had instructed the police to summons or arrest those who gather in large groups. This would be in light of the social distancing rules in place during the COVID-19 pandemic.

This writer had driven in through and out of the Williamsburg neighborhood this afternoon due to an appearance by the Mayor at the Marcy Houses (located within the area) for the sake of handing out care bags filled with food and PPEs. I noticed how extraordinarily busy the sidewalks and streets were with those from the Jewish Community passing to and fro. I would then learn later through a tweet by Freddi Goldstein, Press Secretary for the Mayor, about a funeral in the area with large crowds in attendance.

I empathize with the desire to mourn those we’ve lost, but this is absolutely unacceptable. The Mayor is on the scene and the NYPD is breaking this up. 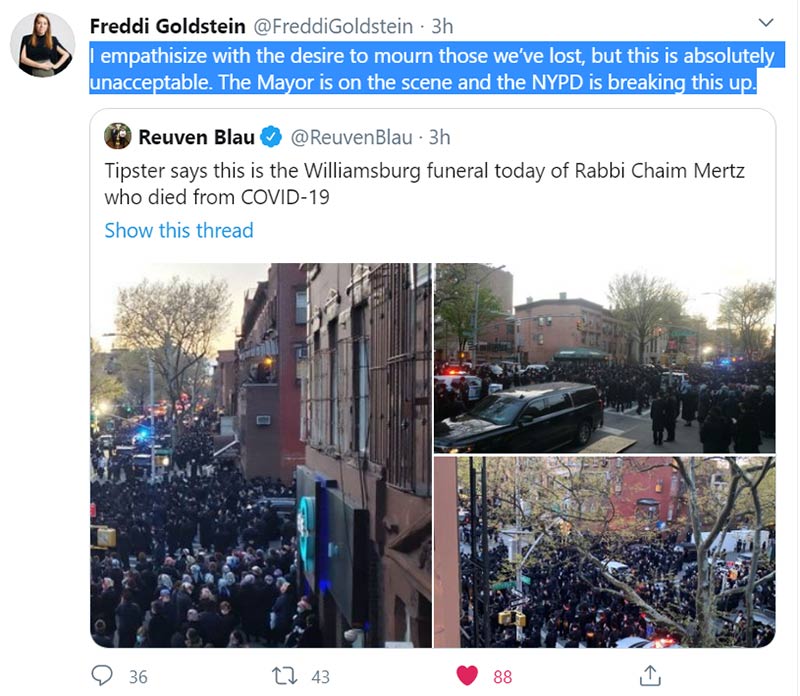 This would be followed by three successive tweets by the Mayor:

We have lost so many these last two months + I understand the instinct to gather to mourn. But large gatherings will only lead to more deaths + more families in mourning. We will not allow this. I have instructed the NYPD to have one standard for this whole city: zero tolerance.

My message to the Jewish community, and all communities, is this simple: the time for warnings has passed. I have instructed the NYPD to proceed immediately to summons or even arrest those who gather in large groups. This is about stopping this disease and saving lives. Period.

Something absolutely unacceptable happened in Williamsburg tonite: a large funeral gathering in the middle of this pandemic. When I heard, I went there myself to ensure the crowd was dispersed. And what I saw WILL NOT be tolerated so long as we are fighting the Coronavirus 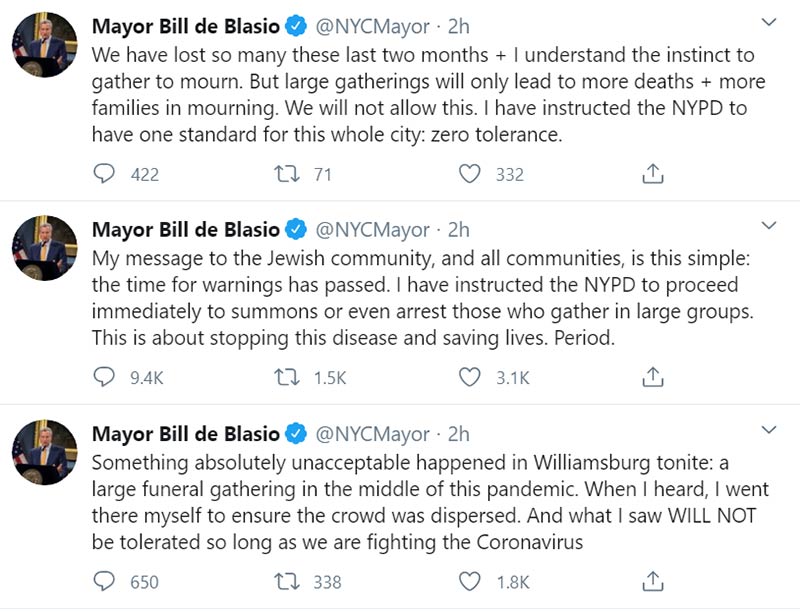 This would not be the first instance of such a happening. There’ve been numerous instances since the beginning of the Pandemic and since Governor Cuomo mandated his “New York on Pause” plan, thus placing the state and city on a lockdown with social distancing and numerous other rules to follow.

Brooklyn
Share. Facebook Twitter Pinterest LinkedIn Tumblr Email
Previous ArticleMayor de Blasio, There are Still iPads For any Student Who Needs One!
Next Article NYC Mayor and Council Speaker: New Yorkers will be able to get Marriage Licenses Online