In 2015, Board Member Judy Andrea asked, “is NYCHA on the worst landlord list because they should be.”

Today, NYC Public Advocate Jumaane Williams expressed great concerns over the incompetence and mismanagement by the NYC Housing Authority which resulted in several deaths of elderly women of color.

“I am incensed, I’m outraged that we lost three grandmothers murdered and one who fell because the elevator was out,” said Mr. Williams.

It was discovered recently that three elderly women of color were victims of a serial killer who was apprehended by the NYPD. The women, Myrtle McKinney, Jacolia James and Juanita Caballero were all residents of NYCHA’s Woodson Houses in Brownsville, Brooklyn. Respectively, the women died in 2015, 2019 and 2021. 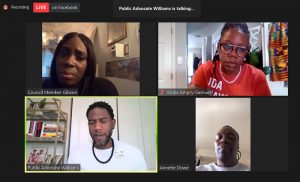 Eleanor Dowe, another NYCHA resident, died after succumbing to a coma following her fall down a flight of stairs.

According to the Public Advocate, local leaders and countless NYCHA residents, it’s faulty non-working elevators and non-existent security cameras that are to blame for these needless deaths.

“Yesterday, because of NYCHA’s incompetence and mismanagement, we actually spent the day burying Annette Dowe’s Mom,” said Jumaane Williams. “Ms. Dowe’s mom tried for months and months to get NYCHA to fix the elevators in the building. They failed to follow through. Councilmembers worked to try to get that done as well and NYCHA didn’t follow through.”

“She took the flight one stairs and fell. She was in a coma and passed away. This all happened as we were learning of a serial killer preying on elderly black women in Brownsville Brooklyn. NYCHA failed to install security cameras as it promised.”

Following is a tweet posted by Jumaane Williams stating:

I just came from the wake of Ms. Eleanor Dowe. She lost her life using the stairs after her @NYCHA elevator was out. AGAIN!!!
This follows the horror on front page news yesterday @NYCHA = Broken promises, lies, mismanagement and underfunding
INCENSED is not the word

I just came from the wake of Ms. Eleanor Dowe. She lost her life using the stairs after her @NYCHA elevator was out. AGAIN!!!

INCENSED is not the word 🤬🤬🤬 pic.twitter.com/D0SYpqlsQk

The discussion also included talk about the $40 billion of funds needed to see NYCHA’s 175,000 apartments through the many repairs needed – and whether management was up to the task of properly handling such capital. A subject we’ll be covering through another article posting.

Through some quick searches we uncovered the minutes from an April 14, 2015 Community Board 4Q meeting. Then NYC Public Advocate Letitia James (now NYS Attorney General) presented the following:

Board Member Judy Andrea asked is NYCHA on the worst landlord list because they should be.

In the middle of December, 2020, Mr. Williams released the Worst Landlords Watchlist which had NYCHA at the lead. It’d held that position in 2019 and in the year prior with Ms. James as the NYC Public Advocate.

In a December 2019 interview with PIX11 News he stated:

“NYCHA is hall of fame. It dwarfs everyone else so much it skews the list. So, NYCHA is the perpetual number one. There’s actually 100,000 more open orders now than there was a year ago. Even after a monitor, after a new chair. It averages about 300,000 a year. In November of 2019 there were about 324 open work orders.”

His related press conference for that year’s announcement can be seen here.

Today, in response to a question we posed to Mr. Williams about what local government could do to rectify the problems, he responded:

I don’t want to deny the amount of money that is needed to fix these capital problems. Both the city and the state need to come up with a lot more – particularly the state.

The Governor said, when he was running for re-election that he had millions of dollars that was going to be given to NYCHA. Has that money been spent? Where did it go? The city has to give up some more. I hope the city has stopped lying about things. But we’re hearing more and more about the impact of lead. It’s worse than we even thought it was. So that would be a good start. Stop the lying and have some transparency.

Let’s figure out what’s going on with the management of NYCHA. We need to bring the unions to the table to figure out… let’s do that. But we can no longer skip over the difficult questions about what’s happening. Because funding is one thing. But management over what we have right now – we have failed even to do just that.

The money for the cameras was there. The chairwoman said that they were spending the money that they did have on elevators and _____. NYCHA’s routinely called with broken elevators. No more lies. The lying may be what’s preventing us from actually focusing on where we have to focus.

This administration has said they were going to be different and they’re not. On so many issues including NYCHA.

And you hear Ms. Dowe doing what we’ve asked residents to do – asking people to be responsible and figure out a way for our own collective public safety. And they’re doing that.

Regarding the cameras …the funding was there but NYCHA management made a decision to not continue with the installation because of COVID.

So it also goes back down to how they prioritize the work that they’re going to do and clearly in this particular case, safety and security was based on the backburner during COVID, but at the same time we had 12 seniors die in that same building in 2020. So it’s back to mismanagement.

When NYCHA makes these types of decisions particularly with funding whether it’s through the city, the feds or local council discretionary dollars there should be a process.

NYCHA should not have the authority to just determine that money that’s designated for elevators or cameras is now repurposed for something else. And so, as councilmembers, we individually stay on top of our own allocations but I also think that we have to, as a council, stay on top of the broader capital that NYCHA is getting from the city and the feds.

Cause when you talk to residents on the ground that may not necessarily be the priority that they envision for their development. And yes, I understand that COVID delayed everything. We know that. All capital was delayed for the moratorium. But now that we’re beyond that and moving forward we have to prioritize based on the needs of the residents on the ground and not what NYCHA thinks are the needs, but the needs that the residents believe should be prioritized as relates to capital.