Today, NYC Mayor Bill de Blasio and Schools Chancellor Richard Carranza shared the news with New York City during today’s press conference. Beginning on November 19, 2020, schools will be closed for in-person school and will transition to remote learning for all of New York’s students.

The question’s been on the minds of many as the city’s numbers continued to come close to the predetermined threshold of 3.0 %. In anticipation of that milestone being reached, the Mayor issued a warning last Friday to Parents of the possibility that schools could be closed as early as Monday of this week.

Today, he also suggested that they would likely be closed through the end of the month.

Mr. de Blasio stated that the city’s “stringent health and safety standard” would need to be raised in order to reopen schools.

“We’re going to have to focus even more on testing. And I want to emphasize, testing is going to be crucial to the successful reopening of our schools and everyone has got to get engaged even more on testing,” said the Mayor. “I guarantee you that part of that plan will be an even heavier emphasis on testing and therefore want to say to everyone in the school communities, starting with parents and kids.”

Interestingly, or perhaps not so much, complaints are running rampant in social media circles with folks complaining that schools are being closed for no good reason. Looking upon numerous postings one can see their pointing to the low rates amongst students in schools as opposed to those outside the school system.

Yet, there’s one statistical chart which we find no one pointing to. That item on the NYC Department of Health website which references the positivity rate by age. We’ve watched it for days now since the Mayor first brought attention to these new graphs just over a week ago.

According to this data, those age ranges with the highest positivity rates, over the course of weeks are made up of babies (aged 0 to 4), preteens (aged 5 to 12) and teenagers (aged 13 to 17).

A screenshot of the chart illustrating those stats can be seen below: 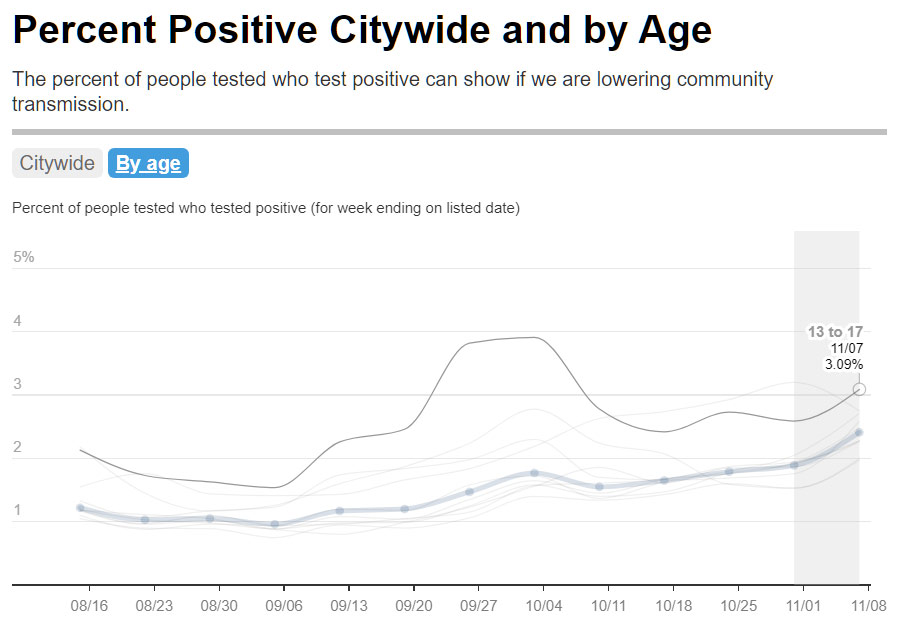 NYC Council Speaker Corey Johnson had the following to say on the announced school closures:

“This is a devastating moment for New York City. Through the Council’s oversight, we know that remote learning is failing many of our most vulnerable students, including special education students, those who live in homeless shelters, and those from low-income neighborhoods. We also know that many students do not have the devices they need for remote learning, while others are waiting on Wi-Fi. This was unacceptable in the hybrid learning model and catastrophic now that we are going fully remote. The City needs a detailed plan to keep all students’ learning on track. This should have been done already, but since it hasn’t, they must move quickly to put a plan in place.

“The de Blasio Administration also needs to present the public with a reopening plan. This has been a disaster for parents and caregivers. The least the Administration can do is to be honest about what to expect going forward.”

Also commenting on the closures is NYC Comptroller Scott Stringer:

“As a public school parent, I am angry about the leadership that failed to make it possible to keep schools safe and open. It is a sad irony that schools are closing on the same day my office went to court to stop the stonewalling of our investigation into the de Blasio Administration’s response to the first wave. And while our kids will no longer have access to in-person instruction, people are still dining indoors, going to gyms, and working in non-essential offices. This does not pass the common sense test.

“Thousands of families, including mine, will continue to muddle our way through this school year, and Elyse and I are enormously grateful to the boys’ teachers and their colleagues throughout the city. We absolutely must turn our attention to the 100,000 New York City public school students without internet access — 13,000 of whom are in homeless shelters, many with special needs. These are the children government must be fighting for, and failing them is a moral failure. Two weeks ago I proposed recommendations to give these students internet access to enable remote learning, and provide them with much-needed support. Mayor de Blasio owes it to our children to adopt my recommendations or find another way, immediately, to make sure all of our children — most especially those in need — can learn even as the doors of our schools are shut.”