On Vaccine Efforts: Mayor’s Faulty Memory Has Him Believing There’s an Adult in Trump’s Midst 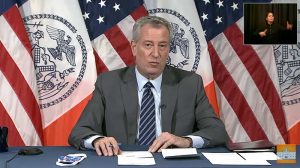 Talk about a COVID-19 vaccine over the past days and weeks reached a peak with Pfizer’s announcement yesterday. Their press release spoke of their vaccine candidate’s effectiveness:

“The case split between vaccinated individuals and those who received the placebo indicates a vaccine efficacy rate above 90%, at 7 days after the second dose.”

Today, the Mayor was asked about any concerns he might have over the Trump administration’s handling of the vaccine and its distribution. He responded by stating how less concerned he was now (presumably due to the newly elected president, Joe Biden).

“… because I think at some point the adults in the room will prevail and there will be a recognition in the Trump administration that there has to be an orderly transition and that’s going to help ensure that whatever happens with the vaccine is done more consistently,” he added.

We wish we could share the Mayor’s bright outlook concerning the man who’s refused to concede to the President Elect. The same man who, just this week, fired his secretary of defense with just over 70 days left to his presidency. The very man who is telling everyone, caring to listen, that the election’s been stolen from him without the slightest verifiable shred of proof.

Not too long ago, NY Governor Andrew Cuomo’s spoken of how the Whitehouse Coronavirus Taskforce’ vaccination plans are deeply flawed. He referenced its limited distribution network and failure in working with state personnel. An additional complaint centered on the scale of such a project – citing how New York State took 7 months to carry out 13 million COVID-19 tests.

“So I think their fundamental plan, while simplistic, is deeply flawed,” said the Governor.

Days later, he alongside Attorney General Letitia James, National Urban League President and CEO Marc Morial and NAACP President and CEO Derrick Johnson spoke of how the current plan relied on the existing flu vaccination infrastructure and private health care companies which have historically resulted in under-vaccination rates and worse health outcomes in communities of color.

On the eve of Election Day, the Governor spoke of the Federal Government’s request for patient data in exchange for COVID-19 Vaccines. Aside from sex, age and ethnicity, they’re also looking for passport, social security or Driver’s license numbers from individual patients. As per the Governor, The information provided would be used by the CDC, HHS and “other federal partners.” Operative term there being, “other federal partners.”

Mr. Cuomo called into question who these federal partners might be and why was this detailed information needed?

New York City and other sanctuary cities have been the target of the president – deemed as “lawless” and “anarchist” cities from which federal funds would be withheld. It’s not hard to make a correlation between that and the need for personal identifying information.

The Mayor spoke of this on October 22 when the city filed a suit in Seattle against the Trump administration.

On past dealings with the President:

Since the onset of the COVID-19 crisis in New York leaders had hit one brick wall after another in their dealings and requests of President Trump.

In March, the Mayor called for the federalization of the National Guard practically begging for something to be done on a near daily basis. The Mayor clearly knew that which he’d predicted would come to be. New York City would suffer horribly at the hands of a deadly pandemic. It did.

Both the Mayor and the Governor had also called upon the use and application of the Defense Production Act, yet it fell on deaf ears repeatedly.

Both have publicly ridiculed Trump in the recent and distant past. And yet, Mr. de Blasio thinks there to be an adult in his midst?

Just this week, officials close to him (from Speaker of the House Mitch McConnell to Attorney General Barr) have declared their support of his pursuits of supposed voting fraud.

Yet, the Mayor has faith.

Honestly though? If truth be known, New York City’s come a long way and I believe it can hold off until the end of January for a vaccine. Maybe Mayor de Blasio’s got the same thoughts in the back of his mind?

So in a sense, that alone renders the entire argument moot. But, I’m no epidemiologist, I’m no expert. I’m merely a New Yorker praying this all comes to an end sooner rather than later.