On Sunday, December 15, 2019, hundreds of tenor and bass tuba players of all ages brought music to the Rink at New York City’s Rockefeller Center’s Plaza as they belted out one Christmas/Holiday tune after another for the 46th Annual Tuba Christmas celebration.
On this cold and windy afternoon tubists of all ages and from all over America assembled in front of the 18 foot tall Prometheus Sculpture on the ice rink located at the lower level of Rockefeller plaza. Above this all, stood the 77 foot tall Norway Spruce Christmas Tree all lit up for the season at the center Manhattan.
Along the edges overlooking the rink below were hundreds of spectators, made up of tourists and Native New Yorkers alike. All onlookers and those within hearing distance enjoyed the holiday classics being played by the many musicians who in turn were led by Conductor, Chris Wilhjelm.
Some fun facts for the day include how the instruments, decorated with ornaments and even Christmas lights, along with the many festive hats worn by the participating performers made for a most colorful presentation. Also, ages ranged from the three performers as young as 10 years of age to the most senior player at the young age of 79. Altogether, there were at least 400 performers this year.

Image below of Conductor Chris Wilhjelm 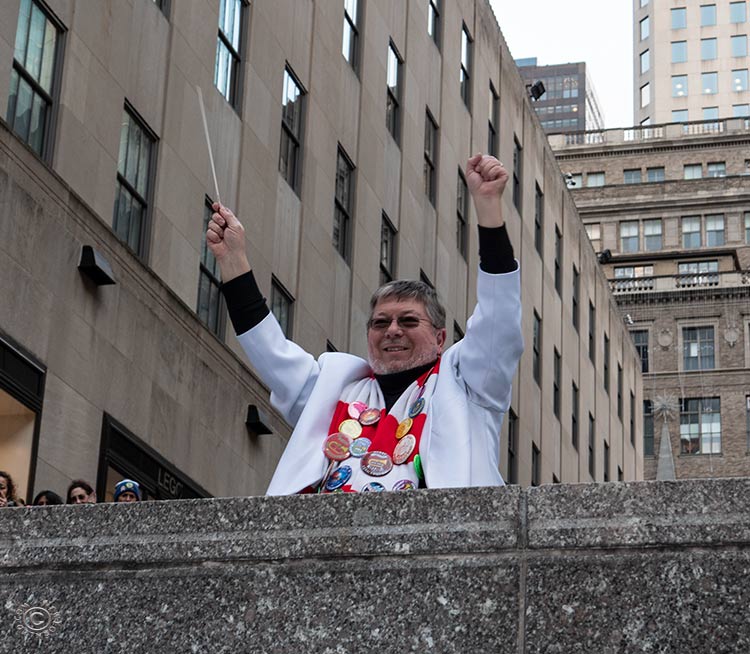 The announcer for the event had some words to share:
“Perhaps the first really great tuba player, his name was Bill Bell and he is the person who we dedicate our concerts to. Because he was such an amazing tuba teacher. He played right here in an orchestra called the NBC Symphony and he trained a whole generation of tuba players. Perhaps his most famous student was our mentor, the late great Harvey Phillips who started Tuba Christmas for so many reasons. To show you how beautiful the sound of the tuba is. But also, to remember his amazing teacher, the great Bill Bell.”
Thereafter, they played Bill Bell’s favorite Christmas melody, Silent Night. It was not the final performance for the afternoon but just one of the many which delighted folks of all ages. This event was the 46th annual occurrence of its kind in NYC with vast numbers of versions taking place in cities near and far.