On May 18, 2020, we’d undergone COVID-19 antibody testing. Unlike the diagnostic test which involves a swab going up your nose, this one only involves the withdrawal of blood.

We arrived over half an hour early and were pleased to find a line of waiting people. It stretched from the entrance to the corner and all the way up a hill. Not that we’re crazy about lines, but the fact this many individuals showed up for a test that’s voluntary and would help the city on its way towards a recovery is heartening.

We waited maybe 20 minutes on line before finally reaching the door. There, I was handed a pair of medical gloves to put on. Once inside, my temperature was taken and I was ushered into a room filled with maybe 6-8 persons; each sitting at their own table filling out a questionnaire. I took mine to my own assigned table and began answering the questions. Pretty simple straightforward questions as related to my medical history, my activity and my life in general. Nothing beyond that which one might expect when dealing with such a test.

Not long after completing my form, I was then directed to another lab-like room with individuals distanced far enough apart from each other. Like the others in the room, I would have my blood drawn, after which I was free to leave through a separate exit. ‘and that’s it! Simple and easy in every possible way.

Thanks go to Diana, the nurse who took my blood. She’s a wonderful and warm personality. We spoke briefly about the need for such testing. We both agreed that it was great for so many people to come out and get such a test which wasn’t mandatory. ‘and how important it was for our city to be able to get back on its feet. She happily allowed me to take her photo.

When I left, I saw how there was still a line out the door and up the hill. Diana had told me that such would be the scene throughout the day.

Our participation is in response to the City-wide Antibody Survey announced by Mayor de Blasio on May 7. This round of testing would have 140,000 tests administered within certain New York City communities over a one month term. With 5,000 tests per day, this would help the city in better dealing with the Novel Coronavirus Pandemic & Crisis.

Why did we volunteer for this test?

We had no reason to believe we’ve ever been infected.

We did so for the sake of helping our city of New York. We want a recovery just as much as anyone else does. The city and state made these tests available for good reason. It’s for the sake of collecting much needed information. 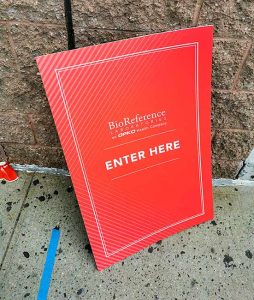 It’s the sort of information that would help our leaders and professionals (both in medicine and politics) not only determine the best course of action going forward towards a recovery, but as well to better learn about the disease. Statistics, demographics and any other pertinent information that could be gotten helps these people in their fight against the virus.

The detection of antibodies would tell if one’s been infected with the disease.

Based on that, has on ever been symptomatic? If not, then the fact that a person is asymptomatic and has been infected says whole lot as well.

How many might end up being asymptomatic and yet with antibodies could be a reflection of how safe we might actually be as a society.

How often has a person been out in public? What’s their line of work? Are there any trends to be found?

All this and many other clues I can’t think of could be gotten from these sorts of tests.

Keep in mind, as mentioned earlier, this was only part of a single survey. Yet, with the way NY Governor Andrew Cuomo and NYC Mayor Bill de Blasio have carried on, I imagine there’ll be many more opportunities for New Yorkers to get tested.

For the most part, the other antibody and diagnostic test campaigns, offered up throughout our city, require certain criteria. Eligibility requirements include being part of a most-vulnerable populace or acting as a worker on the front lines of this crisis. Just recently, diagnostic testing was made available to all essential workers who come in contact with the public. It’d have been a follow-up on the Governor’s own statement in April declaring that it would be taking place.

Also, certain New York State regions have been given the green-light to a Phase-1 reopening. Folks from such areas would also be eligible to some form of testing. Mayor de Blasio has hinted that we may very well be hitting the needed benchmarks during the first half of June.

We’ve no doubt that more and more testing would be made available with fewer criteria needed. It’s the only way out of this mess. At least until there’s some sort of vaccine.