At the very bottom of this posting you’ll find a quick image gallery of photos taken during our visit.

As in past years, we had the pleasure of once again visiting with the exhibitors at the 2017 PhotoPlus Expo which took place at the Javits Convention Center from October 26-28. The usual representatives from assorted photography, video and digital imaging companies were on hand as well as new ones.

Aside from the main expo, we were also able to stop by the PPE Test Drive which took place on Wednesday, October 25. There I had a quick chat with Noah Christensen, Chief Marketing Officer and owner of Platypod Pro LLC (maker of the portable MAX and Ultra mini-tripods). Admittedly it took me a little while wrapping my head around the concept of a tripod sans legs being able to support the weight of an attached tripod head, camera and lens without falling over; but as Noah quickly pointed out, you wouldn’t assemble any sort of combination that wouldn’t otherwise work on a ‘normal’ tripod. Meaning, in essence, whatever works on a tripod will work on their device(s). Amazingly, each respective model can handle quite a bit of weight; much more, that is, than your average tripod. The Ultra runs for $59 and the larger MAX costs $99. Funnily enough, another concept I had trouble with was the notion of fastening these pods to a wall or any other surface. Scenarios, albeit possible, but not necessary. In a nutshell they’re simply levelers which, considering their own weights of 13 ounces and 3.2 ounces plus the amount they’re able to handle, is an amazing prospect.

On the second day of the main expo we were unable to narrow down the right individual at DxO with whom to speak concerning their acquisition of Nik Software Collection; an item I’ve used personally since way before Google even laid their hands on the company. Yet the highlight of the day was our visit to the newly created NYVR (NY Virtual Reality) Expo taking place on that very day and the next.

The attendance at this event was much slimmer than we’d anticipated. Perhaps the fact that it was hidden away with not enough direction signage had something to do with that? Regardless, I’m pleased to say that I enjoyed my interaction with the exhibitors there.

Following would be transcribed conversations with representatives of two companies. Please excuse my lack of familiarity with all things VR related. This was all spur of the moment and I would have otherwise had a better offering of prepared questions for those with whom I’d spoken.

My first stop was at the Oblix VR booth and their offering of “The Oculus Rift application is Oblix’s flagship product, offering the real world in virtual reality like you’ve never seen it before.” I was able to test out the application myself by immersing myself into their world through a pair of Oculus Rift glasses. 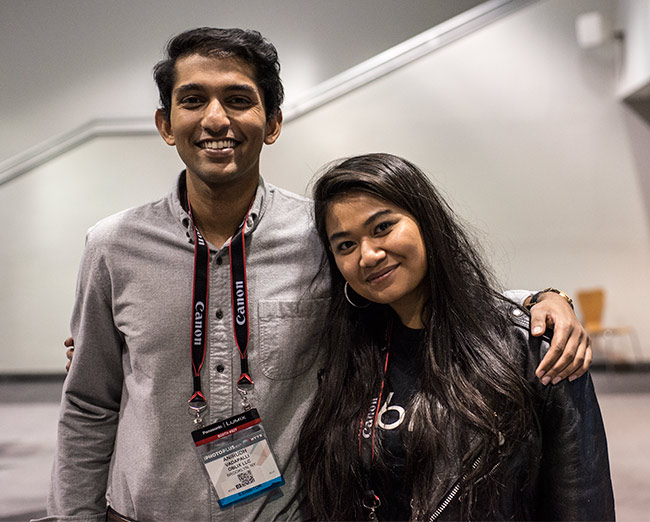 Andy: We’re building a platform for user generated immersive content. So anything from a 360 photo to 360 videos and livestreams and what we’re doing is re-creating the world in VR and using that as the interface from which people can explore the content. So, a user flies throughout our virtual earth accessing media where it’s geographically located.

Me: So you’re creating this world itself?

Andy: We have a partner, or supplier that gives us geodata and then we build the interface on top of it. So support for content, the database for that content, the social interactions so our users and avatars are in this virtual earth and they can see and interact with each other.

Me: So people would be traveling through this world and interacting with each other that way? So that there’ll be a cartoonish version of yourself within this world?

Andy: Yep, Exactly! You’ll be able to talk with other people, explore new locations with them

Me: Would the general public or rather programmers be able to add to this? I mean, do you envision in the future licensing this out to gamers and such?

Andy: We’re trying to build a non-gaming application for the average consumer. There can be other experiences that are built into this. That’s on our roadmap. Right now we’re focused on 360 photos, videos and livestreams because that’s the kind of content that people can create now easily. Eventually we want to have support for interactive experiences that you program into the world.

Me: So the possibilities are endless I presume?

Andy: As endless as the world itself.

Next up was my visit with Hieroglyph who was showcasing their DRAWN2™ plugin which according to their website “is the only 2D illustration and design system that seamlessly integrates Virtual Reality into the Adobe© Photoshop© workflow.”

Me: This works off a special file format?

Jacques: To open the file is a proprietary format but your saves are the formats everybody knows and loves like pngs, tifs … your export format is normal, we have a proprietary file  that we use to open the file in photoshop. You’re reopening your file in photoshop, you still have your .psd but you also have a special .vr file. It’s a separate file that’s attached to the other.

Me: In other words, one doesn’t go without the other if you want to make full use of the entire program. So in as far as making use of everything, no special glasses or goggles are necessary right? You just work off the computer?

Jacques: Right you just work off the computer.

Me: But in the end, the idea is to be making use of it using goggles?

Jacques: It all depends though. Here’s the reality, you have a lot of things like ‘Tilt-Brush’ where you’re waving a wand in the air and you have to imagine translating people waving wands in the air to work places across the country…it’s not going to happen. So we’re thinking more in terms of an enterprise, people use Photoshop for a million different things every day and our goal was to make something that’s indistinguishable from Photoshop itself except with 360 powers. Meaning we’re very slight and we’re camouflaged into the software to where you don’t have to learn anything. This software has no learning curve. If you know how to use Photoshop you know how to use Drawn2.

Me: you see online a lot of people posting 3d videos or rather interactive images wherein you panning right, left, up and down, so I presume you’d end up with such an item using this software?

Jacques: Yes, and I’d like to point this out which I think is important when you brought up all these services that have all that stuff. You have a website, DeviantArt which is a popular website for artists. An artist’s social network. The site has over 20 million users and their virtual reality input on DeviantARt is 0%. So, it doesn’t exist. So we’re filling that entire gap. By giving those artists the ability to do something in the way that they’ve always known. See, a lot of VR is demanding people to move outside of their comfort zones and wave a wand now instead draw on a tablet. You see, I’m used to drawing on a tablet and I know Photoshop, so basically, what we’re saying is, that’s okay. Stick to what you’re used to. Get our stuff and it’s completely easy.

Me: Who came up with this? Whose idea was this?

Jacques: It’s a team effort. The mathematicians are probably the foremost responsible for the execution. I mean, I’m the primary inventor and the co creator and ceo of the company is Anthony Marks. It was a joint invention between us. I’m a little more of the design end and he’s more of the sales end. So we’re the cofounders.

Me: What about the name Hieroglyph?

Jacques: The word Hieroglyph obviously has to do with a combination of pictures and code … synergistically combined and that’s a description of what we’re doing.

Unfortunately, as of this writing, there’s not too much information on each of the company’s corresponding websites about their related product(s). I wish both teams great success. As for the expo itself I’m grateful for being invited and look forward to participating once again in 2018.