COVID-19 Variants now account for 72% of new cases in New York City according to statistics released by the City’s Department of Health.

Weeks ago we reported how the NY and U.K. strains made up 51% of new cases.

The chart below illustrates the above mentioned numbers: 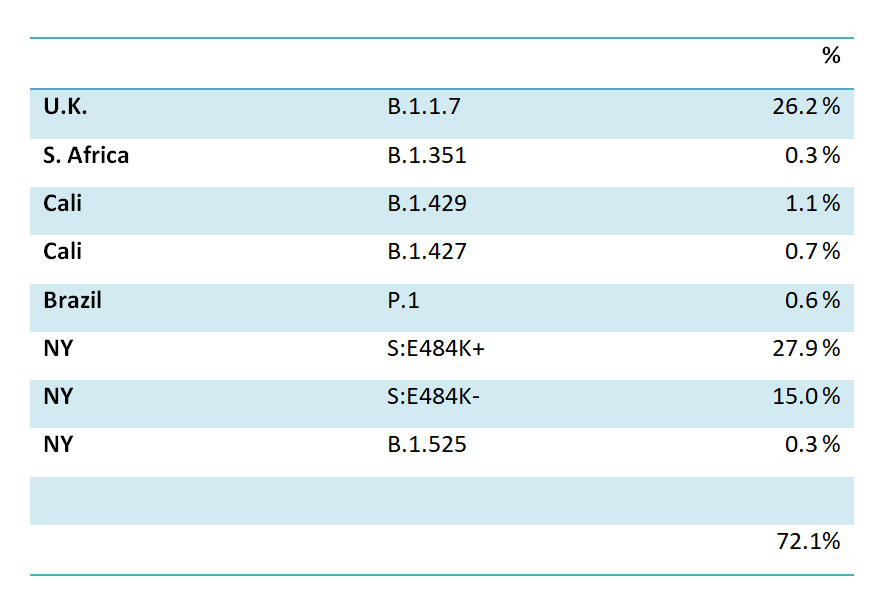 Dr. Chokshi responded to a somewhat related question during yesterday’s mayoral press conference. The following is what he had to say:

“There are some of the variants, particularly the B-1351 and P-1 variant, those are the ones first identified in South Africa and Brazil, respectively, that do appear to be able to evade our immune response more so than some of the other variants of the virus. And so, that’s something that we are following closely and there appears to be evidence that people who get those variants are more at risk of reinfection, even if they’ve had COVID-19 in the past. With all of that said, you know, based on our own observation here in New York City, including the variant that was first identified here in the city, we’re not seeing a greater likelihood of reinfection from that particular variant or the likelihood of reinfection growing over time. So, this is something that we’re continuing to follow very closely, and we’ll keep everyone updated if our understanding changes.”

It’s clear that all New Yorkers need to remain ever more vigilante regardless of whether they’ve been vaccinated or not.

Remember, even IF the vaccines protected everyone from these strains, there’s still the possibility of being a carrier and transporting the virus to another individual who has yet to be protected.