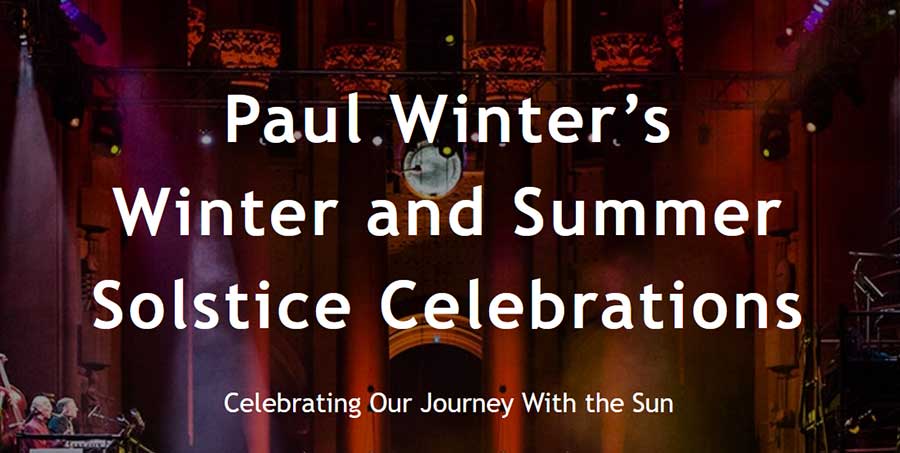 In The Hills Of Northwest Connecticut

“Our most profound event of the year.” – Paul Winter

World-renowned cellist Eugene Friesen will be a special guest at this concert. Friesen has gained an international reputation as perhaps the most innovative cellist of our time.

Eugene Friesen and Paul Winter will be part of a unique “Summer Consort,” which will also include Brazilian pianist Henrique Eisenmann and bassoonist Jeff Boratko. This unusual ensemble, while only a quartet, will still have the original “three horn” configuration that has been primary to the Paul Winter Consort’s instrumentation since the beginning. (Winter thinks of the cello as a “horn” also.)

“When I first imagined, in the 1960s, having cello as a primary instrument in the Consort, my dream was to find a rare-bird player who could liberate this soulful instrument from its symphonic shackles and play with the kind of personal voice that my favorite jazz players have on their instruments. Eugene Friesen has taken the cello way beyond,” says Paul Winter. “While being a masterful player in the classical tradition, Eugene has become arguably the most creative improvising cellist on the planet. But above all, what I treasure most is his sound … his singular voice. He gets a robust, warm, ‘fat’ sound, using thicker strings, playing on a fairly standard contemporary cello, in contrast to the thinner, more nasal sound of a Stradivarius being pushed hard to project to the back row of Carnegie Hall. And Eugene does not have the automatic vibrato that seems to be favored by classical string players. He uses vibrato judiciously, but he often employs the straight tone of a horn.”

As cellist of the Paul Winter Consort during the past four decades, Eugene Friesen has been an integral part of Paul Winter’s annual solstice events, both summer and winter. However, because the ensemble’s beloved “home forum,” New York’s Cathedral of St John the Divine, has been closed since last spring due to the Covid pandemic, Paul Winter has reinvented the wheel and produced these events in his barn. Given the concerns about travel over the last year, it didn’t feel appropriate for Eugene Friesen to come to Connecticut from his home in Vermont in 2020. Hence, the 2021 Summer Solstice Celebration will mark Friesen’s “debut performance” in the barn.

Henrique Eisenmann is a young Brazilian pianist with deep roots in classical music and jazz, as well as the gamut of unique Brazilian genres. He came to the U.S. several years ago to study at New England Conservatory, where he is now on the faculty. He also teaches at City College of New York and is teaching improvisation to piano students at Juilliard. His first recorded collaboration with Paul Winter is on Winter’s recent album Light of the Sun.

Paul Winter describes Jeff Boratko as a “budding Renaissance man” who is a superb bassoonist and composer. “And he’s the only bassoonist I know,” continues Winter, “who is also an accomplished singer-songwriter.”

From the early days of his college jazz sextet, which toured 23 countries of Latin America for the State Department and performed the first-ever jazz concert at the White House for the Kennedys in 1962, to his later ensemble, the Paul Winter Consort, Paul Winter’s concert tours and recording expeditions have taken him to 52 countries and to wilderness areas on six continents, where he has traveled on rafts, dog sleds, mules, kayaks, tugboats and Land Rovers. He has recorded over 50 albums, of which seven have been honored with Grammy® Awards.