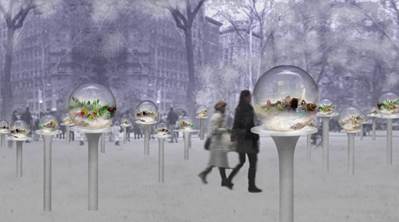 Gazing Globes, Paula Hayes’s first outdoor sculpture exhibition in New York City, will be on view on the West Gravel area of the park.   The work features eighteen transparent spheres that hold the detritus of contemporary culture, including used batteries, computer parts, and other remnants of technology sprinkled with fairy dust made of pulverized CDs.

Formed into beauteous objects, Hayes’ crystal balls positioned on elegant fiberglass pedestals summon the present and predict the future. Each see-through globe lit from within will house used batteries, tossed-out computer parts, castoff electronic transistor parts, vacuum tubes, shredded rubber tires and recycled plastic flotsam. To these mixed remnants of technology and culture the artist adds crystals and minerals. A shimmering fairy dust made from pulverized CDs will coat the bottom and sides of each sculpture’s interior. Hayes, who typically works with varieties of plant materials, is determined that everyday castoffs are indicative of a society’s behavior and value system and symptomatic of the current landscape.