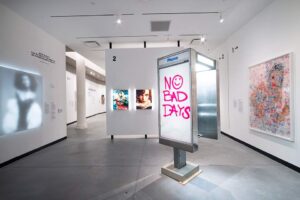 (New York, NY – January 23, 2023) Poster House, the first museum in the United States dedicated to the global history of posters, will present four new exhibitions for the spring season. The two main exhibitions, Black Power to Black People: Branding the Black Panther Party and Made in Japan: 20th-Century Poster Art, will open to the public on March 2, 2023, at Poster House, located at 119 West 23rd Street, Manhattan. In addition to the main exhibitions, two mini exhibitions, Advertising Type: Women in Digital Design and The Revolution Will Be Digitized: Typefaces from Emigre & FUSE will be open to the public on April 27, 2023.

“Poster House’s spring 2023 exhibitions expand the canon of graphic design history, while providing fresh interpretations on classic poster themes and highlighting diverse cultures, countries, and topics,” said Angelina Lippert, Chief Curator and Director of Content at Poster House. “This season’s main exhibitions take on particular importance in the wake of increased violence toward Black and AAPI communities, whose contributions to design history are often ignored. A design museum at its core, Poster House’s two typography shows highlight how the democratization of a medium allowed previously excluded groups–especially women–to experiment with it, and break new ground.”

Black Power to Black People: Branding the Black Panther Party (March 2, 2023 – September 10, 2023) features 37 works dating from 1932 to 1980, that chronicle how the Black Panther Party (BPP), one of the most influential militant groups of the 1960s civil rights movement, devised a specific graphic language to reclaim Black humanity and decommodify Black life. The exhibit includes heroic images of party members, printed materials like The Black Panther newspaper, and political campaign posters. These graphics and materials allowed the Black Panther Party to control its own narrative and brand Black nationalism to advance a communal revolution.

The BPP branded a new movement that relied heavily on the use of bold language, striking graphics, and powerful photographs of its members wearing black-leather jackets and carrying exposed firearms. The BPP’s graphics and posters were important for the dissemination of information to the public, widely sharing radical images and slogans that captured a shift in tone in the fight for civil rights. These posters and newspapers further established an authentic Black identity, responding to historic systems of exploitation and anti-Black violence. Artists whose posters are exhibited include: Emory Douglas, Dorothy Hayes, Danny Lyon, among others.

Made in Japan: 20th-Century Poster Art (March 2, 2023 – September 10, 2023) features 73 works that highlight and explore the cultural and political shifts within modern Japan that influenced the functions and messaging of its iconic advertising and promotional posters, and how those posters were subsequently received by the public. The show highlights the history of collaboration as well as the mix of traditional and modern influences that make Japanese design unique.

The exhibition showcases posters throughout the twentieth century, beginning with the Second Sino-Japanese War and World War II, with images designed to inspire patriotism, circulate propaganda, and encourage consumer restraint in support of the war effort. As Japanese corporations became global brands following World War II, Japanese artists conceived new forms of graphic media that mixed aspects of traditional Japanese aesthetics with Western design idioms. The exhibit also highlights how Japanese designers began to address social issues through their art at the end of the twentieth century, such as climate change and global peace. The exhibit will include works by artists such as Hokusai, Yusuka Kamekaru, Ikko Tanaka, Tadanori Yokoo, Keiichi Tanaami, Kazumasa Nagai, among others.

Both the Black Power to Black People: Branding the Black Panther Party and Made in Japan: 20th-Century Poster Art exhibitions come to Poster House through a generous loan from the Merrill C. Berman Collection.

The Revolution Will be Digitized: Typefaces from Emigre & FUSE (April 27, 2023 – November 5, 2023), curated by Steven Heller and Angelina Lippert, explores typography as the world entered the Digital Age in the 20th century. After the introduction of the Macintosh Computer, a new era of digital type design was born. The exhibit explores Emigre and FUSE, two of the earliest and most prominent digital type foundries founded in the 1980s and early 1990s, exploring the evolution of type design. This exhibit will feature 29 posters from Emigre and FUSE announcing new, innovative digital typeface designs to the world.

Advertising Type: Women in Digital Design (April 27, 2023 – November 5, 2023), created in partnership with the Type Directors Club and Amber Weaver of You Creative Media, features 12 type specimen posters targeted to graphic designers who are in the market to buy or use a typeface in a project. These posters are typically distributed at conferences or events to promote the marketing launch of a new font family.

This exhibit explores the birth of the digital typographic era in the 1990s, when there was the sudden ability for any individual to create fonts on a computer, meaning that established foundries no longer had a monopoly on developing and disseminating typefaces. These posters advertise digital typefaces and showcase the myriad of women who are expanding the world of type design today.

Poster House, which opened in June 2019, is the only museum in the United States dedicated exclusively to the global history of posters. Poster House’s mission is to explore the hidden histories of this art, while mapping their role in today’s media landscape and encouraging the continued evolution of design. Poster House is dedicated to presenting the impact, culture, and design of posters, both as historical documents and methods of contemporary visual communication. Learn more at posterhouse.com