Posters and Patriotism: Selling World War I in New York

at the Museum of the City of New York 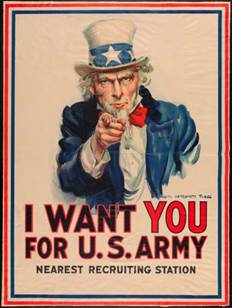 When the United States entered World War I in April 1917, two and a half years after the war started, New York City artists and illustrators were convinced to join the war effort; and many of them worked for the federal government’s new Division of Pictorial Publicity. Posters and Patriotism: Selling World War I in New York explores the outpouring of powerful posters, flyers, magazine art, sheet music covers, and other mass-produced images created by these New Yorkers to stir the American public to wartime loyalty, duty, and sacrifice.
Digging deeper into the ideas behind the patriotic aesthetic, which mirror current events in familiar and perhaps disconcerting ways, the exhibition examines themes such as nationalism, fears surrounding immigration, and censorship of the press, that have emerged and reemerged in our national consciousness throughout American history, especially during times of crisis.
Posters and Patriotism showcases over 60 examples from the Museum’s renowned World War I poster collection donated to the Museum by railroad executive and financier John W. Campbell (1880-1957) in 1943, most exhibited for the first time, as well as the work of defiant artists in such colorful publications as The Masses, The Fatherland, and Mother Earth.