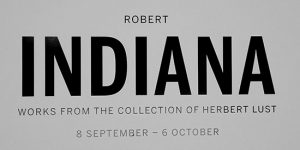 Please find below a quick gallery of photos taken at the exhibition. 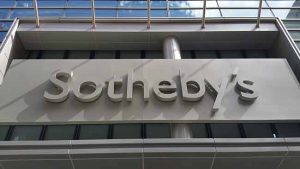 Announced this week is an exhibition taking place at Sotheby’s S|2 featuring the work of Robert Indiana as culled from the collection of Herbert Lust. New Yorkled’s had the opportunity of passing today on this second day of its opening and it was a delight to not only see some of Mr. Indiana’s other works first hand but as well to enter through Sotheby’s doors for the very first time. Remember folks, this is an exhibition that’s open to the general public.

Born Robert Clark in New Castle, Indiana, Robert Indiana is well associated with the pop art movement. Many a New York native or tourist may have stumbled upon his pieces without even recognizing the artist behind the work. What I’m referring to is the LOVE sculpture found at 6th avenue and 55th Street. Yet that wouldn’t be the only spot where it can be found. The original rendering appeared in 1970 in the state of Indiana and many versions of it exist throughout the United States as well as in foreign lands. To be considered as well would be his Hope sculptures and many other works known all over the world.

Following are photos taken during my visit today.

NEW YORK, 8 September 2017 – Sotheby’s S|2 is pleased to present Robert Indiana: Works from the Collection of Herbert Lust from 8 September – 6 October 2017 in New York. Consisting of 30 paintings and drawings from the collection of Herbert Lust, the artist’s friend and patron, the exhibition has a particular focus on Indiana’s early career when he first emerged on the scene at the forefront of Pop Art alongside Warhol, Lichtenstein, and Rosenquist. The exhibition includes but also goes beyond Indiana’s well known LOVE imagery to present an artist deeply inspired by the American Dream, both good and bad, and the societal ideas that surround it. The exhibition presents Herbert Lust’s entire collection of paintings and drawings by Robert Indiana which are unveiled to the public for the first time.

Nicholas Cinque, S|2 Gallery Director, New York, commented: “We are incredibly excited to present this exhibition of early work by Robert Indiana, which features the artist’s complete visual lexicon of signs, text and numbers on canvas and paper. The show provides a rare opportunity for collectors to explore Indiana’s artistic output of the 1960s, and is part of our re-calibrated S|2 program, which seeks to shine a spotlight on artists, previously under-appreciated or misunderstood by the market, by contextualizing their work and underlining their role in the arc of art history. We’d also like to thank Herbert Lust for this opportunity to share one of the most important collections by Robert Indiana in private hands.”

Herbert Lust on the Art of Robert Indiana

Through a unique relationship, Herbert Lust has built one of the top collections of work by Indiana in private hands. In 1973, well into his career as an investment banker, Lust met the artist at a party in New York and acquired his first painting by the artist that same year, beginning a lifelong friendship. Over the decades, he has championed Indiana’s work as a collector and scholar, helping to organize international gallery and institutional exhibitions as well as donating Indiana’s paintings to museum collections. In 1989, Lust supported Indiana as a dealer through his late wife’s eponymous gallery, the Virginia Lust Gallery in SoHo. After Indiana relocated from New York City to Maine, Herbert continued to buy paintings and drawings from him, many of which are on view in this exhibition.

The exhibition will run concurrently with a show of drawing and sculpture by Robert Graham. A leading contemporary sculptor in Los Angeles, best known for his exploration of form and figure in bronze, the exhibition highlights the artist’s life long exploration of the human body.

Plus the official Sotheby’s site