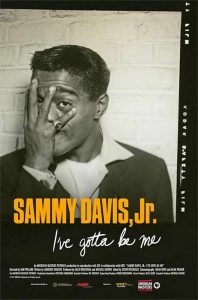 SAMMY DAVIS, JR.: I’VE GOTTA BE ME is a documentary film that explores the life of the legendary Sammy Davis Jr., born on December 8, 1925 and having passed away on May 16, 1990. It features numerous archive film and stage clips as well as commentary from various stars and notables.

I myself had only known vaguely of Mr. Davis’ broad talents. Through this film one learns of the extent to which he was a consummate performer. From singing, tap dancing and acting to playing multiple instruments, the man was immensely talented. He’d had numerous hit songs, acted in film and got rave reviews for his onstage performance in Golden Boy for which he and the musical garnered Tony Award nominations. He was well known early on (in the 1950s and 60s) for his informal membership in the ‘Rat Pack’; an ensemble of performers comprised of Dean Martin, Frank Sinatra, Peter Lawford and others.

Yet things were never quite easy for Sammy Davis as a performer in the spotlight, and even before then. During his early days serving in the US Army, in the second World War,  he’d discovered the ugly sides of bigotry and racism. Since then his problems appeared to be touch and go as he’d deal with the changing social and political landscapes of the 1950s going into the 60s and beyond. His involvement in reaching out to the troops of the Vietnam war and supposed “missteps”, as well as his associations with Richard Nixon, 37th President of the United States, cast him against antiwar sentiments in America as well as the African-American civil rights movement.

Relatedly speaking, to one question posed to him, “You don’t see it as a political stand?” (referring to his visiting Vietnam).

His response: No, I do not, I see it as…they’re a bunch of Americans…because we do not like Vietnam and our involvement in it, do we forget the hundreds of thousands of kids that are over there? That’s the point of view that an entertainer must assume, at least I do, and I cannot forget that our guys are over there. I can’t make believe they ain’t dying every day. ‘and if I can bring them 20 minutes or an hour of meager enjoyment…then I’ve accomplished something as an entertainer.”

He would cross paths with Martin Luther King Jr. one day and another path in his life would open up. He would find himself giving considerably to the cause fought for by King and others.

A couple of related quotes:

Harry Belafonte: “He did a lot of things for Dr. King and for our movement, his commitment was never really fully realized historically, he stepped to the table and not only gave money but got a lot of his friends in Las Vegas involved ” in reference to Sammy Davis’ efforts in support of the Black Rights Movement

Sammy Davis Jr. was awarded the Spingarn medal by the NAACP in 1968 for “outstanding achievement by an African American.” Yet the notion that’s brought to light is how he felt he was never fully accepted by the African American community. Of course, I’m sure, being someone whose life is being illuminated as brightly as Davis’ has an effect on the individual. That’s is, in as far as acceptance, ego and being appreciated are concerned.

He would later go on to deal with new problems such as an addiction to drugs and alcohol as well as his bout with throat cancer; an illness to which his life would succumb.

In the last moments of the documentary, David Steinberg, publicist for Sammy Davis, Jr. says: “Sammy was show business from the tip of his toes to the top of his head”

Sammy Davis Jr.: I’ve Gotta Be Me is an engaging work and eye opener. I’ve learned things I’d never known before and have a greater appreciation now for the perfomer’s achievements as well as the eras covered within the film.

Cultural Film
Share. Facebook Twitter Pinterest LinkedIn Tumblr Email
Previous ArticleA Visit to the Robert Indiana Exhibition at Sotheby’s + Photos
Next Article Our visit to the The Croton Aqueduct at 175 Exhibition at MCNY Plus Photos