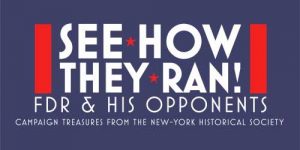 “See How They Ran! FDR And His Opponents: Campaign Treasures From The New-York Historical Society”

To mark the final, and what will surely be the most intensive phase of this year’s pitched battle for the White House, the Roosevelt House Public Policy Institute at Hunter College will mount the new exhibit, See How They Ran! FDR and His Opponents: Campaign Treasures from the New-York Historical Society. The show will present vivid examples of the onetime “new media” tools that were powerful enough in its time to mesmerize and motivate millions of American voters during Franklin D. Roosevelt’s four historic campaigns for president from 1932 to 1944.
See How They Ran! FDR and His Opponents: Campaign Treasures from the New-York Historical Society will be on view at Roosevelt House from Thursday, September 29, 2016 through Wednesday, November 30, 2016, Monday through Saturday, 10 AM-4 PM, at 47-49 East 65thStreet in Manhattan, and is free to the public.
Deceptively quaint buttons, posters, broadsides, and radio broadcasts once seemed just as cutting-edge as the Twitter, Instagram, Facebook, and television platforms that are dominating the campaign of 2016—and in their time, proved equally powerful as tools to convey the campaign messages of FDR and his four rivals for the nation’s highest office.
The rare and rarely seen political, relics—including original artwork (like an FDR campaign poster by Ben Shahn), along with metal and celluloid pins, paper prints, signs, consumer goods, sound recordings, and popular music—all boasted captivating messages, slogans, and images that reverberated through four of the most important White House campaigns in our history, and arguably moved millions of voters to the Roosevelt camp.
For complete information about the exhibit, call 212-650-3174 or visit here.