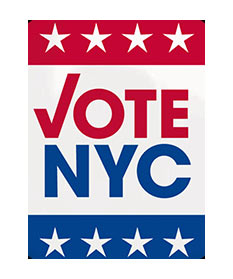 BROOKLYN— On the sixth day of Early Voting, Brownsville elected officials and community leaders gathered to encourage a strong turnout from communities of color and all New Yorkers in this year’s election. Over 500,000 people have already voted in New York City this year. However, during the first three days of Early Voting, turnout as a percentage of eligible voters assigned to the Van Dyke Community Center in Brownsville was significantly lower than at other large Brooklyn sites such as the Barclays Center and the Brooklyn Museum.

Senator Myrie is Chair of the Senate Elections Committee, and the law creating early voting in New York was Senator Myrie’s first bill signed into law by the Governor in 2019. New York City will host 88 early voting sites across the city through November 1.

“What we have seen over the past six days has been extraordinary. Over six hundred thousand people have already taken advantage of the opportunity to vote early in New York City. We are on track for record turnout in the most important election in our lifetimes,” said Senator Myrie. “It’s been inspiring to see the long lines at the Brooklyn Museum and the Park Slope Armory. But here in Brownsville we’ve got work to do as well. Neighborhoods and communities like ours across the city and country have borne the brunt of the pandemic, the economic devastation and the injustice we see every day. Our road to recovery is on the ballot and we can shape our future by turning out to vote. I encourage everyone in Brownsville and beyond to get out, get on line and get counted. The stakes are too high to stay home.”

“So far early voting has been a huge success with over 500,000 votes tallied so far with a third of the votes coming from Brooklyn. Early voting has been so successful that the Board of Elections has extended the voting hours for the final weekend leading up to the election,” Congresswoman Yvette D. Clarke said. “I would like to thank all of my colleagues on the federal, state and city levels for helping to spread the word about early voting. I am thankful for the poll workers and voting rights advocates who have been serving our community with the utmost professionalism and expediency. You are the guardians of our democracy and I thank you for your commitment to upholding our democratic values.”

“It has been exhilarating to see so many people taking advantage of early voting. I am so proud of Brooklyn for leading the way this election with remarkable voter turnout,” said Assembly Member Latrice M. Walker. “I hope with the passing of the Automatic Voter Registration Bill that we will see even more people voting and voting early in the years to come. We all have a role to play in our democratic process and I commend all of the advocates, election workers, government officials, and last but not least the people feeding the voters in line. Every member who is able to vote should exercise their right to vote. It is our duty to make sure we have people in government who represent our interests. Let’s make this last weekend of early voting an even greater success. As I always say vote early, and often.”

“If the past four years have shown us anything, it is that communities like ours must step up and have our voices heard,” said City Councilmember Alicka Ampry-Samuel. “I am encouraged by the early voting turnout across the city, and encourage voters in Brownsville to vote early between now and Sunday. It’s your right, and your responsibility, to shape the future by voting this year.”

“Black and Brown Communities have the ability to make their voices heard this year,” said Camara Jackson, Founder and Executive Director of Elite Learners. “All voters must remember that our civic duty should not end on November 3rd—we have to make it our collective civic duty to hold elected officials accountable for the laws they pass and the initiatives they support during their term. Our vote is powerful!”

“Now, more than ever, New Yorkers of African descent must consider all of their options for voting safely and confidently and create a plan for casting their ballots,” said Lurie Daniel Favors, Esq, Interim Executive Director, Center for Law and Social Justice at Medgar Evers College. “Due to a rise in white nationalist violence, white supremacists policies and the marginalization of issues relevant to the Black community, it is imperative that Black New Yorkers head to the polls. Please consider early voting, which is an incredible tool that will empower our communities to vote safely while minimizing large crowd size – a tremendous relief as we grapple with the impact of a global pandemic. If you decided to use mail-in voting but haven’t returned your ballot yet, please try to drop it off at an early voting poll site or at the Board of Elections office as the post office cannot guarantee it will be received on time. Time- and our votes- are of the essence. Regardless of our borough or zip code, the Black electorate must mobilize for this election and begin activating our ability to hold elected officials accountable. Vote like your lives depend on it- because in this election, they do.”