Seven Miles of NYC Streets to Open Monday, May 4 as part of the Open Streets Initiative

Mayor de Blasio issued the following tweet on May 1 which we managed to miss. A post stating that the Open Streets Initiative would in fact begin today, May 2 and not on Monday, May 4 as originally planned. 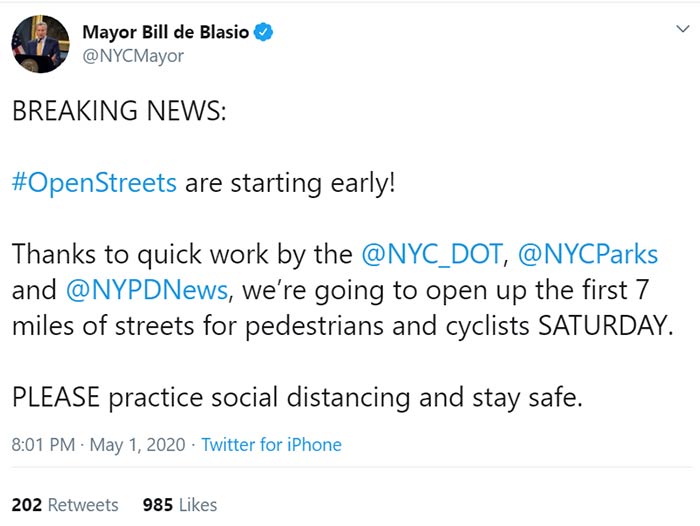 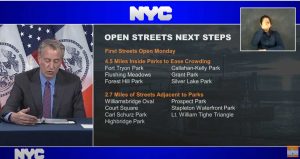 As part of the new Open Streets Initiative, seven miles of space would be opened beginning Monday, May 4, 2020. The announcement came during Mayor Bill de Blasio’s daily COVID-19 Response Press Conference. This comes days after the initial announcement on April 27 that the city would eventually open up to 100 miles of streets and space for pedestrian use; for the sake of better enabling them to social distance.

The mayor outlined which parks would be included.

First Streets Opening Monday include 4.5 miles inside the following Parks:

Also, 2.7 miles of streets adjacent to parks will be closed around the following parks:

“We do know warmer weather’s gonna draw out more people, that’s obvious – and we also know that Thank God, the NYPD and all the agencies are getting back their personnel in really great numbers, so they’re regaining their strength in terms of being able to enforce farther and farther across the city and better and better. So, with the city council we agreed that we would put together a plan to open 40 miles of streets in May – A 100 miles overall over the course of this crisis. The focus would be on those streets near parks because we expect them to attract a lot of people in the warmer weather. We want to expand the parks, if you will, by opening these streets – and of course the hardest hit neighborhoods. The place where you’ve seen this disease have the most devastating effect,” said Mayor de Blasio.

Also present for the conference was DOT Commissioner, Polly Trottenberg.

Commissioner Trottenberg: “DOT, NYPD, FDNY were working with parks and we hoped to be working with local BIDs and neighborhood groups to use barricades and sawhorses and good signage to remind people that these are what we’re now calling Open Streets for pedestrians and cyclists. If emergency vehicles and deliveries need to get through, they can. The goal is to minimize any vehicle activity and agencies and other partners will help to man the barricades and keep an eye on them.”

A more detailed outline of the streets to be closed was provided by the Office of the NYC Council Speaker, Corey Johnson as well as the Mayor’s Office.

Beginning Monday, May 4, the following streets within parks will be open:

The following streets adjacent to parks will also be open.