There’s an interesting online NYC based map we learned of today. Surfing through twitter’s we stumbled upon a tweet from Council Member Carlina Rivera. Representing Manhattan’s District 2, Ms. Rivera alongside Council Speaker Corey Johnson introduced a bill today for the opening of the city’s streets to pedestrian traffic.

So what’s so interesting? This semi-interactive map gives you a measured representation of every pedestrian walkway or sidewalk; or rather, it’s width. Something to seriously consider in these days of social distancing rules.

Not that one needs a map to navigate through the Big Apple. Most of us have a pretty good idea of where we’re going and what to expect. Heck, a New Yorker will just as soon walk with one foot on the street should the need arise. ‘or both for that matter. But that’s not the point.

Rules say we need to keep a distance of six feet – and that ain’t easy! Not always. Not with 8.6 million residents. Especially not with warmer weather on the horizon and leaders telling folks it’s okay to go out and exercise. Not to mention the need to shop for food and such. This map goes a slight distance in the argument for open streets.

Anyhow, the page can be found here: http://www.sidewalkwidths.nyc/

The map gives you an idea of the width of specific blocks, lots and sections and whether they’re right for social distancing. I picked out some spots on the map and compared them with their corresponding respective image on Google Maps. I found that the results weren’t far off from the reality.

Here’s the Council Member’s Tweet minus her retweet. Originating tweet for the map can be found below: 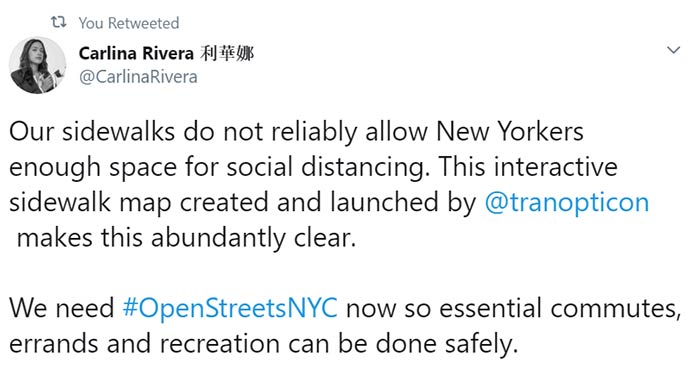 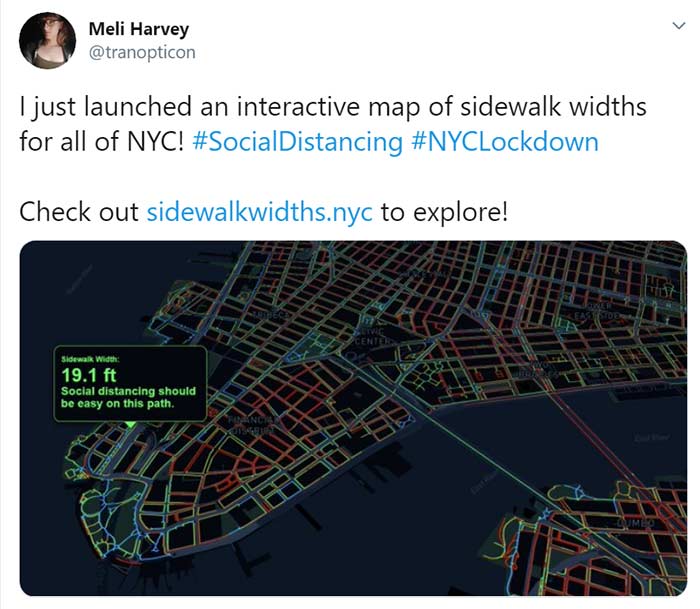