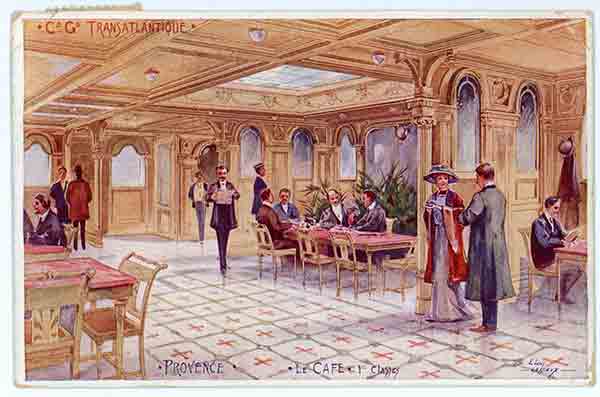 Millions: Migrants and Millionaires aboard the Great Liners, 1900-1914

The South Street Seaport Museum’s newest exhibition Millions: Migrants and Millionaires aboard the Great Liners, 1900-1914 is on display through January 7, 2018, open Wednesday- Sunday 11am-7pm, at the Museum’s mezzanine gallery level, accessible from the main entrance of the Museum on 12 Fulton Street.
Millions: Migrants and Millionaires aboard the Great Liners, 1900-1914 is one of the first exhibitions to examine, side-by-side, the dichotomy between First Class and Third Class passengers aboard ocean liners in the early 20th century.
Ships like Titanic, Olympic, Lusitania, Mauretania, Aquitania, and Imperator dominated transatlantic travel. On each voyage, they transported thousands of people, First-Class passengers sailed across the Atlantic in the lap of luxury while Third-Class passengers made the voyage in the stuffy lower decks.
From 1900 to 1914, nearly 13 million immigrants traveling in Third Class arrived in the United States. During this same period, America’s wealthiest citizens, totaling no more than a hundred thousand passengers each year, traveled to Europe in First Class, spending over $11.5 billion (2017) on luxury vacations. Even though First Class and Third Class sailed on the same ships, their journeys were worlds apart.
This exhibition will feature both original and reproduced artifacts from the South Street Seaport Museum’s permanent collection including ocean liner memorabilia and ephemera, ceramics, and luggage trunks from both immigrants and First Class passengers. The exhibition will highlight a few ship models of New York Harbor working vessels that played critical roles in immigration, including a model of the Museum’s lightship Ambrose (LV-87).
Ambrose, a floating lighthouse, stood watch at the front door to New York Harbor during the greatest period of immigration in US history. Her official duty was to mark the entrance to the Ambrose Channel, a deep channel dredged between 1900 and 1907 to allow larger ocean liners, the largest of which had doubled in size in those same years, safe access into the harbor. But Ambrose had another vital role; her light was the first thing an immigrant would see as they entered New York Harbor, long before the buildings and piers on the waterfront, long before the Manhattan skyline, and long before the lighted torch of the Statue of Liberty.
Evoking the spirit of First-Class grandeur, a piece of wood paneling that once adorned the interior of the Smoking Room of the RMS Mauretania will be recreated by master woodcarver Deborah Mills throughout the run of the show. This work-in-progress will be on view in the exhibition space during regular hours Thursday through Sunday. Each Wednesday visitors can visit the Museum’s Maritime Craft Center at 209 Water Street and watch as the artist brings the piece closer to the original. Throughout the exhibition, there will be screenings of films which feature ocean liners and immigrants in their critical roles in New York Harbor life at a time when this city was the busiest port in the world.
The exhibition familiarizes viewers with passenger life aboard ocean liners, the defining differences between travel for wealthy Americans in First Class and future Americans immigrating to the United States in Third Class, and the continuing importance that immigration plays in American history.
The exhibition is curated by William Roka, Historian, and Michelle Kennedy, Collections and Curatorial Assistant, at the Seaport Museum. Exhibition design and art direction by Rob Wilson and Christine Picone of Bowne Printers, the Museum’s historic letterpress shop.
Lectures and all-ages public programs will take place throughout the length of the exhibition. The exhibition is included with Museum admission: South Street Seaport Museum members: FREE, $12 for adults, $8 for students and seniors, and $6 for children ages 2 – 17.  Tickets can be purchased online at www.southstreetseaportmuseum.org/ or in person at 12 Fulton St.
This exhibition is made possible by generous support from Theodore W. Scull and is supported, in part, by public funds from the New York City Department of Cultural Affairs in partnership with the City Council.
ABOUT SOUTH STREET SEAPORT MUSEUM
The South Street Seaport Museum, located in the heart of the historic Seaport district in New York City, preserves and interprets the history of New York as a great port city. Designated by Congress as America’s National Maritime Museum, the Museum houses exhibition galleries and education spaces, working nineteenth century print shops, and an active fleet of historic vessels that all work to tell the story of “Where New York Begins.”