Star Trek Beyond – A Film Review

Synopsis: A surprise attack in outer space forces the Enterprise to crash-land on a mysterious world. The assault came from Krall (Idris Elba), a lizard-like dictator who derives his energy by sucking the life out of his victims. Krall needs an ancient and valuable artifact that’s aboard the badly damaged starship. Left stranded in a rugged wilderness, Kirk (Chris Pine), Spock (Zachary Quinto) and the rest of the crew must now battle a deadly alien race while trying to find a way off their hostile planet. 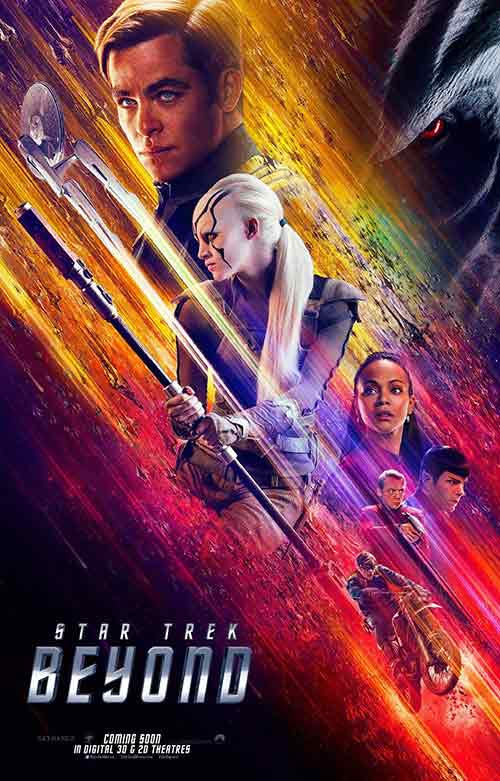 Star Trek Beyond starts out with a funny scene. Actually, one of the most hilarious I can remember any film coming out with in recent history. Thereafter, it’s on to some impressive sights via some truly imaginative and futuristic sets. The sort that’ll have you wishing for more. This plus the most visually spectacular, and shall I say obligatory, decimation of the Star Trek Enterprise ever encountered have me eyeing visual effects acknowledgement come awards time. Might as well throw sound and editing into the mix as well. They’ve achieved quite a bit of stunning eye candy; much more than one could hope for in a film like this.

However, with the exception of the aforementioned beginning scene, what I found lacking in this installment was heart. Heart, in the form of edge of your seat tension in the face of imminent danger. Of the related films past and present there’ve been plenty of scenes to choose from that offered up this kind of tension; scenes involving Kirk and company’s death defying battles whether they be action packed or involving the captain’s own calculated maneuvering against a foe. They’ve always been present in the old Trek films as well as in the past two reboot installments. Unfortunately I just couldn’t find it in this one. Settings that should’ve had me on the edge instead fell and felt flat as if they were being delivered in dead-pan fashion. Well maybe I’m exaggerating just a tad there but I surely wasn’t on the edge of my seat.

Absent as well was ‘heart’ of the emotional-duress kind. Once again, we’ve something here which, although not always present, could be found in previous films. One which comes to mind is the scene in 1982’s “Wrath of Khan” wherein William Shatner’s Captain Kirk bids farewell to his friend Spock before jettisoning the pod carrying his body onto the Genesis planet. Although many might contend that it was the very scene prior to that involving Spock’s own sacrifice which was more emotional; one which would be re-enacted in 2013’s “Star Trek Into Darkness” with the roles having been reversed and Kirk being the one to sacrifice himself for the sake of the ship. Regardless of which you choose, both were in my humble opinion, gut wrenching to watch. Especially for a life-long fan like myself. Even though I mention how it’s not always found in previous films there’s a method to my madness; a reason, that is, for mentioning it at all here. In “Beyond” we’ve Spock broodingly going about the film due to news of Ambassador Spock’s passing. The reason for which I had to remind myself about thanks to either poor acting, directing, dialogue or all of the above. Spock’s behavior felt so very much out of place and yet his reason for being glum were perfect opportunities to emotionally manipulate us, the viewers. Not sure exactly where the fault(s) lay but in the end I felt as if the story-line and the performances were left wanting; as if it had not been strewn together well enough or there simply wasn’t enough heart in the direction?

It’s sad to consider how this wasn’t Star Trek at its very best. I expected so much more and yet I was let down. I’m pretty confident in the actors’ abilities and so I’m left thinking it was matter of bad direction or dialogue. The latter of which wasn’t on its top game either I’m afraid.

I’d be remiss to not mention some of the Easter eggs offered up to faithful audiences. One being the implication that Lieutenant Hikaru Sulu is gay. An interesting thing considering how the original Sulu was played by George Takei who himself is openly gay. Another would be Zachary Quinto’s Spock who at the end of the film reveals a photograph, presumably as part of the elder Spock’s belongings, of the original Star Trek cast members. Remember that they all basically did exist in that other parallel universe. Leonard Nimoy’s own presence in the past two films validate this point. Then there’s also the more conspicuous references such as the Beastie Boys “Sabotage” which got screenplay as what I’d consider a tender recall to the 2009 Star Trek Reboot where it was first played as one of young James T. Kirk’s fave songs. As well would be the passing of Ambassador Spock; fittingly so, considering Leonard Nimoy’s own passing in 2015.

Regrettably, little gems like these are far from being enough to hold the film together.

Despite my disappointments I’m still likely to add ‘Star Trek Beyond’ to my library. So taken was I with the visuals that I’m looking forward to revisiting various scenes on my big home screen display. Here’s hoping the next installment is not just an improvement, but honorably holds up to what we all expect out of any Star Trek Tale.