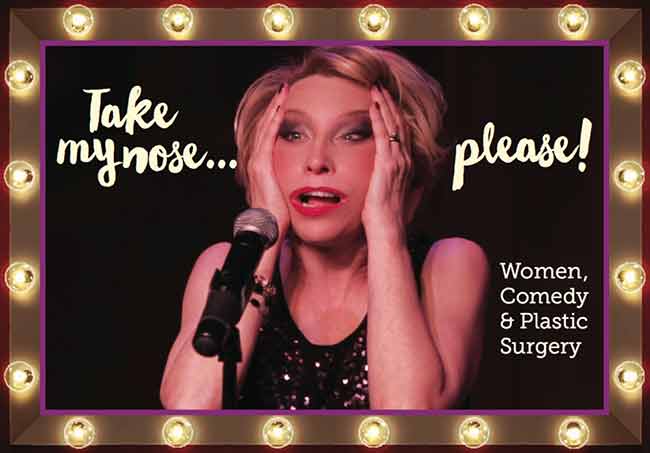 Coming from Joan Kron, former author at Allure Magazine and who’s covered plastic surgery and beauty enhancements for years, is this winning and hilarious documentary, Take My Nose Please. The subject at hand are the comediennes who’ve undergone cosmetic surgery in one form or another.

The film takes a balanced approach in its presentation of the various views on the subject, yet without a doubt, most of it is laugh-out-loud funny. Is it any wonder? Considering how the very best of comedy are featured within.

Amidst all the many interviews, clips and commentary from famous surgeons and authors, as well as such stars as Roseanne Barr, Phyllis Diller, the late Joan Rivers, Judy Gold, Julie Halston, Kathy Griffin, Margaret Cho, Wanda Sykies, Lisa Lampanelli, Giulia Rozzi, and Adrianne Tolsch, are the two whom the film focuses on to some extent: Emily Asken (improve comedian, Upright Citizens Brigade alumna) and Jackie Hoffman (actor, comedian).

We get to spend time with both women as they consider and go through their surgery. Hoffman has a facelift and Asken a nose job. We revisit their stories at various points during the film.

The film opens with Emily Asken discussing how she first started thinking about her nose in her teens to twenties. “I started noticing it the most in pictures. I’ve always said this: I’ve some unfortunate angles, profile is one of them, quarter kind of face is another … I have a Jewish nose, that’s probably offensive to people, but I’m Jewish, so…I kind of feel my nose dragging down to the ground … I can feel it tipping (makes forward moving motion as if her nose’ weight was pulling her head down) … I just always wished I had a straight nose.”

As for Ms. Hoffman, there’s one bit with her singing, “I want to be pulled tucked, and lifted, till I can’t move my face”

At the heart of this piece are the many examples of how women, especially those in show business, find themselves on the road towards surgery. Discussed is everything, from the societal pressures put upon them to the topics of aging and acceptance from within and without. The thin lines existing between particular thoughts of mind are drawn clearly in this documentary: between discussing plastic surgery’s acceptance and actually going through with it nonetheless; between acknowledgement of vanity and the actual use of the word; from the need to please those who make decisions on your career to pleasing the public and in turn hopefully pleasing oneself.

Aside from the quick history lessons we’re given on vanity and beauty through the ages, we get to experience so very much on the subject. Although what rings out most strongly, at least for this audience member, is the point that’s made about comediennes and their ability to open up about the subject much more than anyone else in the entertainment industry is likely to do. As the film informs us, “In 1972 Phyllis Diller wrote about her full face lift in Pageant Magazine and became the first female comedian since Fanny Bryce to speak openly about plastic surgery.”

Also, Virginia Postrel (author, The Power of Glamour) points out: “Comedy tells the truth about who we are, who we really are, we really are dissatisfied with our looks. So the comedienne can tell the truth about … I’m not happy with how I look , I wanted to do something about it.”

The film ends with Emily Asken and Jackie Hoffman having undergone their respective surgeries.

Quite possibly the greatest reveal comes about in a talk between the two women in which self-loathing and self-love comes up. It’s nothing astonishing but I won’t reveal that short discussion out of respect to the film. Methinks it’d be best if you saw Take My Nose, Please!, for yourself.

There’s no question about Joan Kron’s extraordinary achievement in the creation of this documentary. It’s vastly entertaining and informative and brings to light a subject that’s not often visited, at least not in this fashion. Her chosen path and method of presenting the subject matter is award worthy. I thank her for sharing this with us.

“Joan Kron, veteran journalist, spent the past 25 years as contributing editor-at-large at Allure magazine where she covered the hot topics of cosmetic dermatology and plastic surgery. Prior to Allure, she held senior editorial positions at New York Magazine, The New York Times, Wall Street Journal and Avenue Magazine. Kron is known for her books and numerous articles and commentary on design, beauty and plastic surgery.  And now at the age of 89 years old, she has embarked on a new career as a documentary filmmaker.”