The Ambrose, Her History & Her Future 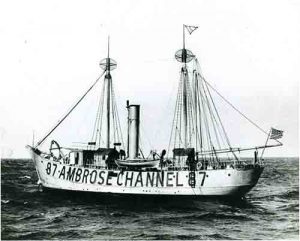 Named after the Ambrose Channel, a shipping channel within Port of New York and New Jersey, the Lightship Ambrose was a name given to numerous ships serving that area. The Ambrose we know of today, which sits at Pier 16 within the South Street Seaport area and also known as Lightship LV-87, was built in 1907. During the days of Spring and Summer visitors are allowed to board and tour her.

What comes this past week is an announcement that the South Street Seaport Museum has received $4.5 million in City Capital Funding for the sake of its restoration and stabilization. As with the many other attractions in the area this comes as great news considering the historical significance of the area. For quite a long time this part of Lower Manhattan has been a major tourist attraction not just for folks visiting our city but as well for those natives amongst us who have always had a great appreciation for the area.

In addition to the Ambrose funding there’s as well the $1.7 billion redevelopment of the Tin Building which sits at Pier 17 and is due for completion in 2018.

Published July 28, 1983, a NY Times article titled “Seaport Site Opens Today with a Fanfare” talks of the 11 block South Street Seaport Historical District’s renovation which took 1.5 years. There’s also mention of the Ambrose herself along with the other adjoining ships and tugboats; such as the Wavertree, Pioneer, Lettie G. Howard. That was all 34 years ago last month. Of course one can’t help but wonder what might be in store for the area another three or four decades from now.

Below the following photo gallery, featuring photos taken by New Yorkled Magazine over the past decade or so, you’ll find the original press release concerning this subject of this article.

The related press release issued is as follows:

For Stabilization and Restoration of the Lightship Ambrose

South Street Seaport Museum receives $4.5 million in new City capital funding to stabilize and restore the famous lightship Ambrose, one of a fleet of five historic vessels on the Street of Ships at Pier 16. The funding, allocated by the Mayor’s Office, City Council, and Borough President, will make possible a robust new education platform on navigation and immigration, both historical and contemporary, for all ages, adding this critical topic to the Museum’s successful, on-going educational opportunities. 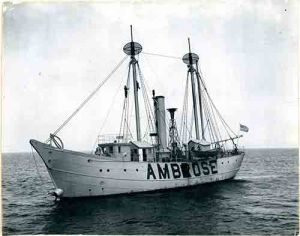 This restoration will dramatically change her current appearance, restoring her visual presence to one that is in keeping with her most important period in service as an active lightship. The restored Ambrose will be one that more faithfully and accurately represents the period in which she stood watch at the front door to New York Harbor during the greatest period of immigration in American history, when her light would have been the first thing one would see as they entered New York Harbor.

Capt. Jonathan Boulware, Executive Director of the Seaport Museum, spoke enthusiastically about the lightship and the project:” The lightship Ambrose is an iconic symbol of New York. For generations, sailors and immigrants saw the steadfast lightship on approach to New York, signaling that they’d arrived. For navigators, this ship was an aid that made the treacherous approach to New York Harbor safer, allowing for the trade that built the financial capital of the world. For millions of immigrants, Ambrose was the literal light of liberty.

Passing Ambrose lightship meant that you’d arrived at America’s shores. Ambrose’s light was the beacon of liberty visible long before the Statue of Liberty. We are thrilled that the City has recognized the importance of this humble lightship and we thank our friends in New York City Council, the Mayor, the New York City Department of Cultural Affairs, and the the Manhattan Borough President for their generous support.”

Key elements of this exciting project include: restoration of the ship’s mechanical systems and shipboard communication systems; restoring a functional steering system and restoration of the her original schooner-rigged sail plan; reconfiguring the ship’s bow and deck houses in keeping with her original schematics, as well as building new lamp houses for the two, hoist-controlled, occulting signal lamps. All of this will make this 110 year-old lightship into a completely unique education platform in support of the Seaport Museum’s programming.

Jesse Lebovics, Project Lead and Director of Historic Ships at the South Street Seaport Museum said of the restoration project: “This is an ambitious project, at the end of which we will have an absolutely unique vessel and the only lightship in its original, as-built configuration.”

“The Lightship Ambrose is a vital part of our history as one of the world’s greatest port cities, and preserving it for generations of New Yorkers to learn its story and walk its decks is a priceless investment,” said Manhattan Borough President Gale A. Brewer. “I’m pleased that I could offer support to this project.”

“The lightship Ambrose is an icon of our City’s enduring history as a haven for immigrants, and I am proud to support its restoration and new educational programming,” saidCouncil Member Margaret S. Chin. “This $4.5 million in city funding will help the South Street Seaport Museum continue its mission to educate visitors through interactive exhibits that incorporate our City’s most beloved historical artifacts. I will continue to support the Museum’s growth as it rings in its 50th year, and for years to come.”

“New York City is rediscovering its waterfront in so many ways, from new parks to ferries as a mode of transport,” said NYC Department of Cultural Affairs Commissioner Tom Finkelpearl. “The Seaport Museum is the best place to dive even deeper into our city’s long history of turning to the water as a source of sustenance, trade, and connections. Following the completion of the award-winning, $13 million restoration of the Wavertree last year, this investment in the Seaport Museum’s lightship Ambrose will help ensure that New Yorkers continue to learn about and engage with this vibrant history that continues to shape our city today.”

“For over half a century, the Ambrose guided and welcomed immigrants to the shores of New York City to begin their new lives in America,” said City Council Majority Leader Jimmy Van Bramer. “As the Chair of the Committee on Cultural Affairs in the City Council, I’m deeply proud of our work as a city to secure millions in funding to preserve and enhance the rich history on board this ship that will keep it sailing strong for years to come. Through the stories and vivid history told within, this ship will continue to guide, inspire, and light the way for generations of New Yorkers.”

Lightship LV-87, also known as Ambrose, was built in 1907 as a floating lighthouse to guide ships safely from the Atlantic Ocean into the broad mouth of lower New York Bay between Coney Island, New York, and Sandy Hook, New Jersey–an area filled with sand bars and shoals perilous to approaching vessels. South Street Seaport Museum’s Ambrose occupied her original station from her launching in 1908 until 1932. In 1921 Ambrose became the first lightship to be fitted with a radio beacon, greatly assisting navigation of the channel in poor visibility. In her role as navigational aid, she was also witness to the largest period of immigration in U.S. history, seeing some six million immigrants pass her station. After her half-century career, she was donated to the newly-formed South Street Seaport Museum by the U.S. Coast Guard in 1968. After the planned restoration, she will be active as an educational platform on the science and technology of navigation, immigration in New York, and the past and present role of shipping in the development of the mighty port city of New York. Visitors can board Ambrose and tour this original lightship, complete with working “radio shack.”

This $4.5 million stabilization and restoration project is funded by the NYC Department of Cultural Affairs, the New York City Council, and the Office of the Manhattan Borough President.

The South Street Seaport Museum, located in the heart of the historic Seaport district in New York City, preserves and interprets the history of New York as a great port city. Designated by Congress as America’s National Maritime Museum, the Museum houses exhibition galleries and education spaces, working nineteenth century print shops, and an active fleet of historic vessels that all work to tell the story of “Where New York Begins.”