The Bad Batch – A Film Review 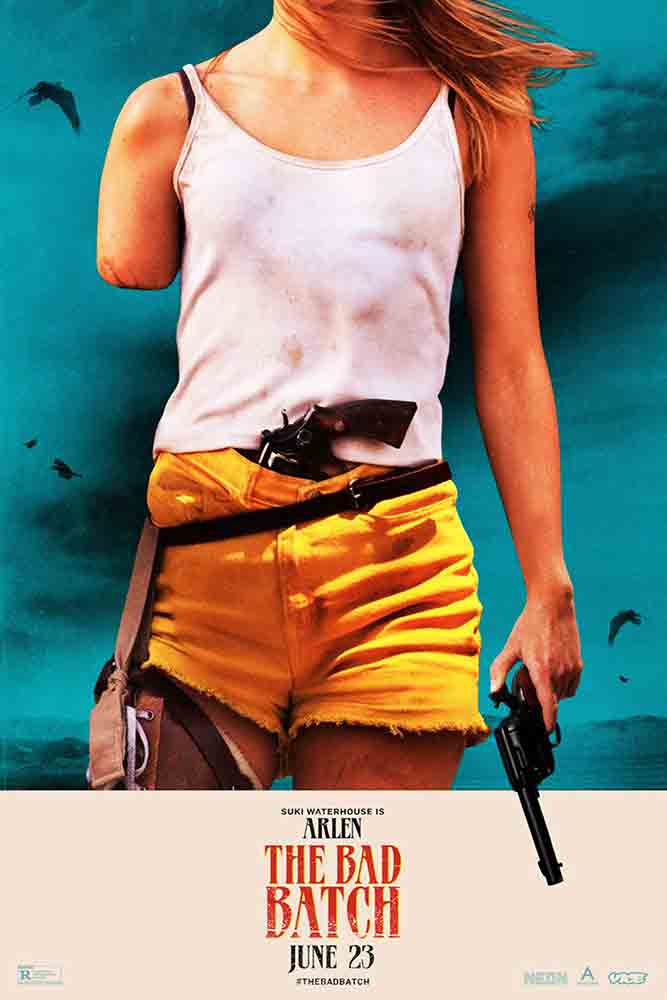 Imagine if you will Quentin Tarantino and Eli Roth coming together for a hallucinogenic tainted evening with the aim of re-imagining Mad Max. If you can then you’ve got an inkling as to what this film is all about. I usually stay away from making any sorts of far reaching comparisons but when you’ve come across a film as unique and out of the norm as ‘Bad Batch’ then it’s open season on comparisons, not that I’ll be going gangbusters in that way. Yet in as far where descriptions go one is left high and dry in the way of elucidating one’s way in explaining this film.

It’s a work that’s surely not for everyone, but one I can appreciate as an artistic film piece. Once I set off on that road of labeling something as an art film then misgivings over plot holes and mind boggling story lines get thrown out the window; but I’ll allow myself just one complaint. It entails Jason Momoa’s character ‘Miami Man’, one of the chief protagonists of ‘Bad Batch’. You see, the man goes around all muscled up in the unlikeliest of places, the desert, where survival is the name of the game and food and water aren’t easy to come by. That’s where cannibalism comes into play. Surely human flesh could sustain a man and his muscle as long as there’s a body to chop and up and consume. Yet alongside the need for protein and sustenance is the universally accepted need for water. See where I’m coming from here? It’s a peeve, not an extraordinary one, but one all the same. Just thought I’d throw that one out there for you to chew on.

Overall, as mentioned in previous reviews, what gets a passing grade out of me is: how do the scenes flow into one another; what’s the chemistry like, if existent at all; how does the dialogue play out; how good and relevant is the soundtrack, again, if it exists at all. Bad Batch, honestly speaking wasn’t so bad at all. It worked for me. Most folks I know would hate it and I can’t say its rewatchability factor is up there; it isn’t. But hey! It’s an art film, or at least that’s how I see it and with that thought? High expectations go where? Where? Right!…Out the window of course.. You’re learning. 😉