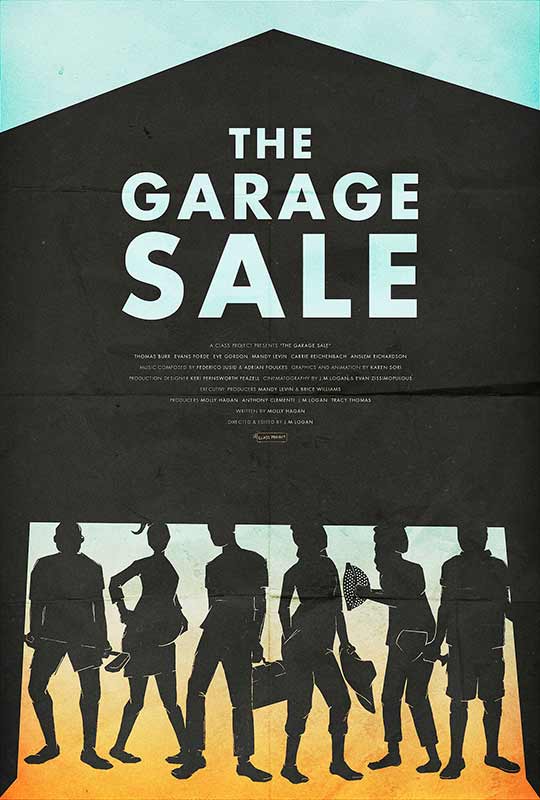 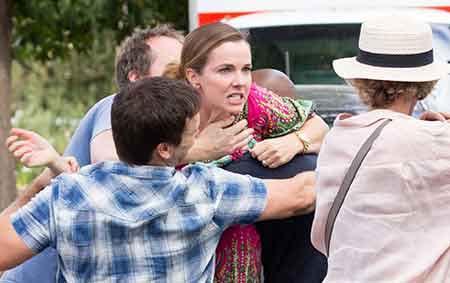 The story follows three couples, presumably neighbors, during a day on which they’ve participated in a community garage sale. At the onset of every act, of which there are three, you’re given the choice of which couple’s story to follow as it pertains to that particular act. Controls allow you to skip back or ahead a certain amount of time and a timer occasionally pops up giving you the choice of moving on to a different couple or staying with the one you’re viewing.

My very first thoughts going into this film were ones of apprehension; thinking of how annoying the experience would be, insofar as clicking buttons is concerned. Buttons existing for the sake of extending the interactive elements of the film. Didn’t take the film long to show how unfounded were my concerns.

Whilst watching the film, you might feel, as I did, about whether your directional choices made a difference in your appreciation and understanding of the storyline. In the end, though, I realized it really didn’t matter much, but then, I suppose I’ll never truly know, since it’s near impossible to start the film all over again having washed away the memory of what you’ve already witnessed.

Regardless, it’s a hilarious and, at times, laugh out loud funny film. You’d have to be sure to pay attention to all that’s going on in every scene so’s to benefit from the humor that’s offered up.

Now let’s get on to the characters, or rather the couples.

There’s Richard and his wife GG, pregnant and looking for a change and a purge from past possessions. Yet GG’s not exactly in the money making mentality and is intent on just getting rid of all the wares they’ve brought to the sale; whereas Richard’s trying to get a good, well deserved return for their merchandise. Case in point would be the Casio CDP 100 portable keyboard for which a prospective buyer offers up $25 yet Richard’s looking for $400. The buyer lays out a sad sack story about her nephew who loves to play music and has so very little; and yet, who comes to her rescue? It’s GG who negotiates on behalf of the buyer who in turn later sells the item for a 600% profit; all right in front of Richard who spirals out of control. This bit right here illustrates the sort of goings-on within the film. 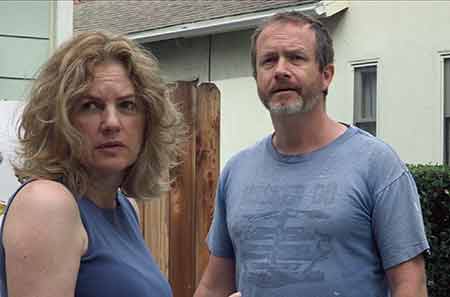 Aside from GG & Richard there’s Merrin & David and Rebecca & Nathan, all with their own simultaneous off the wall stories going on amidst a cast of zany characters. I did watch this work through and through but my first choice every step of the way was GG & Richard.

They all appear to live in some wackadoo alternate universe filled with oddball characters. It’s something that works beautifully here. I’ve seen other filmmakers fail miserably at this sort of thing, that is, trying to piece together such a mix in the hopes of creating something funny; but instead they end up with something that crashes and burns.

What makes this all work is the acting, direction, dialogue, camera work and especially, the comic timing. This is a film that would’ve succeeded on its own sans the interactive aspect, yet it’s that very element that ends up being the icing on the cake. An additional plus is how in the background of every scene, one hears the other characters going about their own personal madness. It’s a formula that works well.  Without the continuously engaging storyline and aforementioned cinematic building blocks any other film would’ve made the interactivity tedious and would have, in turn, suffered further. Thankfully it’s nothing we’d have to worry about with ‘The Garage Sale’.

Considering the way the film is shown, the technical part of me can’t help but wonder about whether there’s an algorithm that’s determining when to show me the directional ‘Go’ or ‘Stay’ buttons; a feature allowing one to stay with the scene being watched or to go on to the ‘intermission’ sort of page which in turn allows you to switch to a different couple. I suppose I’ll never know unless I took note of when such buttons made an appearance and then re-watched the entire film from scratch to compare my own notes. It’s an interesting concept to find oneself referring to a film and its scenes this way; as if one were witnessing a live, multi-room, interactive art display at a museum.

In closing, ‘The Garage Sale’ was a wonderfully innovative demonstration of what’s possible with films. From the prologue to the epilogue its humor was a sight for my sore eyes. I thank the creators of the film as well as the actors for all doing a bang-up job! If you’re looking for something new, different and funny then this is it!

Written and Produced by Molly Hagan

Art and Animation by