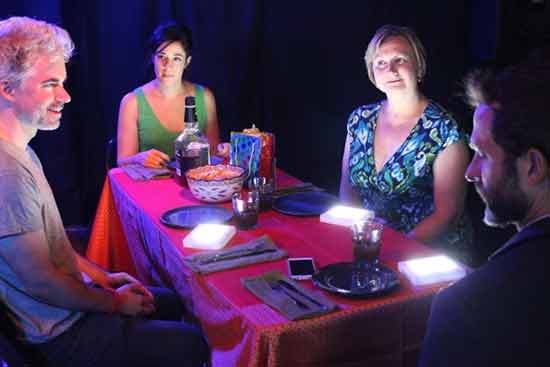 Title Point in conjunction with Propinquity

Title Point in conjunction with Propinquity presents The Intimacy Effect by Jeff Tabnick at Vital Joint, 109 Meserole Street, Brooklyn, NY, from September 28 through October 14, 2017 at 8pm.  Performances:  Thursday, Friday, Saturday at 8pm. Doors open at 7:30pm, and there is no late seating. Tickets are $20; RSVP to [email protected].
In The Intimacy Effect, Matt Appel welcomes his brother and sister-in-law into his family’s small apartment. Over his wife’s objections, Matt tells them about the pregnant woman who showed up at their apartment the day before. This woman’s allegations have serious ramifications for them all. The play weaves in and out of thoughts and actions, the past, the present and the future to explore the porous border between one person and another.

With James Ball, Sarah Doudna, Jennifer O’Donnell, Richard Lovejoy and Ruth Nightengale
Jeff Tabnick’s plays include I Found Her Tied to My Bed (Lightening Strikes and Strange Roads), Something Truly Monstrous (The Blank Theatre), An Idiot (Hangar Theatre), Tonight at Noon (workshops at EST, Telluride Playwright’s Festival, Acme Theatre, Drilling Company) and Love in the Time of Bumblehive (workshops at Stage Left, The Blank, Stable Cable). His work has been included in collections published by BackStage Books and Smith & Kraus. His short plays have been presented in various venues across the country and in England, Spain and Japan.
Eric Nightengale is co-artistic director of Anthropological Theatricals in New York City, and a founding member of Concrete Temple Theatre and The Acme Corporation. He served as artistic director of 78th Street Theatre Lab from 1995 thru 2008. Other New York credits include work with Circle Repertory Theatre, The Acting Company, Circle in the Square, Cherry Lane Theatre, Ensemble Studio Theatre, 45 Bleecker, SoHo Rep, The Barrow Group, HERE, and Classic Stage Company. Chicago credits also include work with Victory Gardens Theatre, Bailiwick Repertory Theatre, Steppenwolf, Chicago Dramatists Workshop, and Second City. His work at the Edinburgh Festival Fringe has resulted in three Fringe First awards, eight published scripts, four adaptations for BBC radio, two Best Ensemble awards, and a London transfer.
Vital Joint is a venue in Brooklyn, NY, created and curated by Title:Point, an experimental theater company, that presents a dynamic range of intimate events geared toward the theatrical, scientific, cinematic, musical, and comedic.